The Bold And The Beautiful Spoilers: Bill Considers Two Sisters – But Will Brooke Or Katie Choose Him? 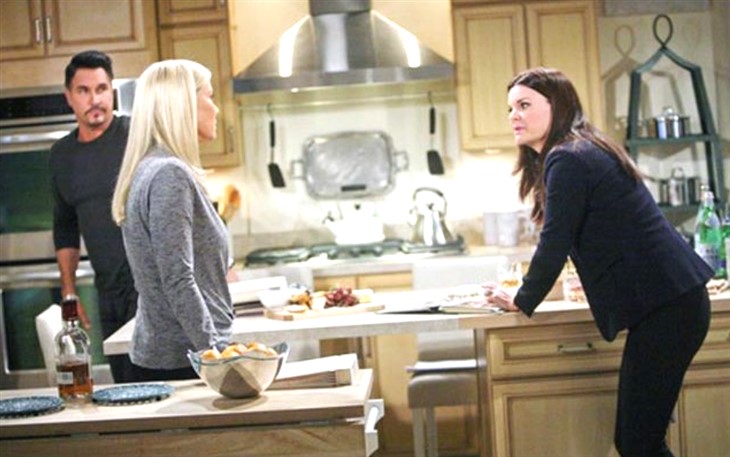 CBS The Bold and the Beautiful spoilers document that Bill Spencer (Don Diamont) thought his life with Katie Logan (Heather Tom) was secure. It wasn’t. Then, he thought he had a chance with Brooke Logan (Katherine Kelly Lang). He didn’t, but that dynamic may soon change.

Neither of the referenced Logan sisters is planning to spend the rest of their lives with Bill. Yes, they both love him, Katie more so than Brooke. But Tom’s character can’t trust him and Lang’s alter ego places him an infinite second to Ridge Forrester (Thorsten Kaye).

The Bold And The Beautiful News Update: Aaron D. Spears Talks What To Expect Next From His Character

The Bold And The Beautiful Spoilers – Batie Troubles Keep Repeating

Katie truly thought that Bill finally settled down. Even he thought that was true. Then, he was in the cabin with Brooke and something sparked in his mind. He looked into Brooke’s vulnerable eyes and a passionate kiss happened because both characters believed they were alone.

Quinn Forrester (Rena Sofer) genuinely believes that she’s done the Forrester family and even Bill a favor by exposing what happened between Brooke and Bill earlier this year. Brooke has lost the most, with Ridge now officially her ex-husband and his new wife being Quinn’s best friend, Shauna Forrester (Denise Richards).

Bill’s lack of accountability was underscored by the emptiness of the promises he made to Katie at the failed Bridge reunion party. Telling her that he made a mistake, that the kiss meant nothing, that she was the sister he wanted to be with.

As viewers have subsequently seen, Quinn’s prod of Bill to go to Brooke due to the Bridge divorce news worked. Katie’s instincts were proven right once again. She can’t trust him because he can’t control himself.

Bill will be Brooke’s consolation prize if she rebounds to him following the unexpected sight she saw in Ridge’s bedroom. Shauna was there, which perplexed Brooke at first. Then, Ridge came out of the bathroom and the scene came into full, shocking focus.

Assuming there is no instant reveal of the plot Quinn suggested and Shauna delivered, Shidge will stay in place. With that Brooke might drop her suspicions about what happened in Las Vegas, Nevada, which would indefinitely delay her learning the truth.

Quinn would remain with Eric, for now, meaning that Brooke couldn’t be with him. So, Bill would become a more appealing option. He’d rationalize her decision by thinking that Brooke came to her senses.

The Bold And The Beautiful Spoilers: Bill Considers His Options After Katie’s Rejection #bb #boldandbeautifulhttps://t.co/xkTq3L9db7

Brooke and Ridge are never really over. Quinn might think she’s achieved the impossible. But Shauna knows that Brooke occupies a major space in her new husband’s heart and therefore remains a comeback threat.

Back to Bill for awhile? That’s logical, but it’s also a temporary status change as many hardcore B&B fans know.