Eastenders Spoilers: Ben Given Ultimatum, Callum’s Boss Forces Him To Make A Choice 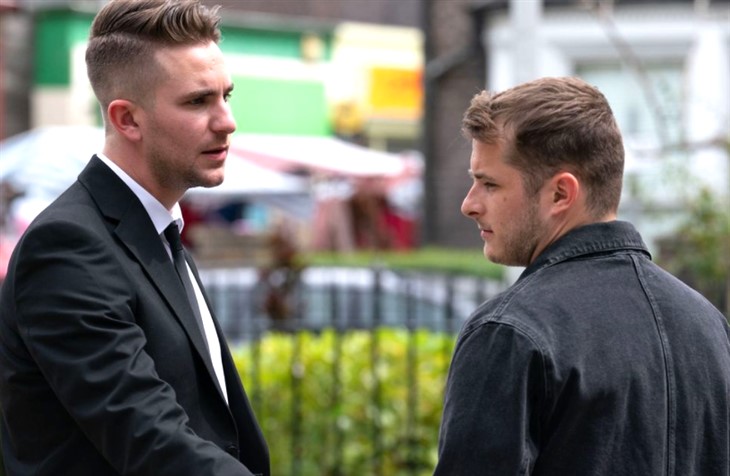 Eastenders spoilers reveal that Ben Mitchell (Max Bowden) and Callum Highway (Tony Clay) are going to have some tense scenes coming up. While looking through CCTV footage, Callum sees Ben. His boss informs him that he wants as much evidence as possible and this puts the police officer in a tough position. Ben lies when questioned and Callum issues an ultimatum.

It was previously teased that Callum’s police job could cause a rift in his romantic relationship. This will play out when the soap returns on September 7. While looking at CCTV footage of a crime, Ben is clearly seen on the screen. This puts Callum in an awkward position and he is going to have to make some tough decisions.

Eastenders spoilers reveal that Callum’s boss wants as much evidence as possible in the case. They are trying to put Danny Hardcastle (Paul Usher). This includes nailing anyone associated with him. The mere fact that Callum recognizes the suspect on the camera, let alone being in a relationship with him, could put his job at risk.

It is teased that Callum will demand the truth from Ben regarding Danny Hardcastle and the warehouse job. However, Ben lies and keeps secrets from the man he loves. This puts Callum into a fury, so he ends up making an ultimatum.

It was previously indicated that Ben’s path and dirty dealings could negatively affect his relationship with Callum, who has gone into law enforcement. Even though Callum knows the truth because of the CCTV footage, Ben still lies to him. He ends up making an ultimatum and it will force both men to make hard choices. Will Callum end up turning in the man he loves? Or will he risk his career and become a criminal accessory by keeping Ben’s secret? We will have to wait until the soap returns next Monday to find out.