The Bold And The Beautiful Spoilers: Hope’s Actions Misinterpreted By Steffy – Liam Has To Deal With Fallout 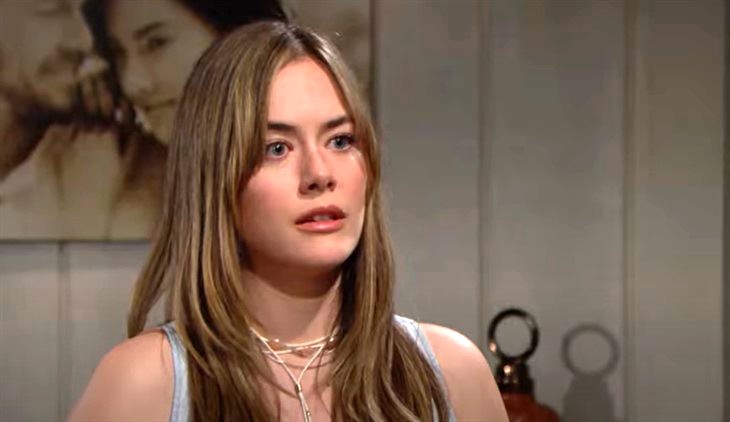 Hope didn’t know the mental anguish Steffy was enduring when the ladies spoke on the phone about Kelly Spencer (Avalon and Colette Gray) remaining at the cabin. If she and Liam Spencer (Scott Clifton) were aware of Steffy’s predicament they would have helped her.

Lope is interested in supporting Steffy, not harming her. But Wood’s character can’t see that because her mind is consumed with pain and now increasingly clouded by pain-killers.

The sight of Steffy downing her last pain pill with a few swigs of beer was frightening. It also reflected just how desperate this poor soul has become.

The pain she’s suffering, as a result of the effects of the motorcycle accident, hasn’t subsided. Dr. John Finnegan (Tanner Novlan) authorized a refill of Steffy’s original prescription within the last week after meeting with her at the cliff house.

However, Finn would be very upset if he knew that Steffy chose to mix alcohol with her last pill, as that was a very dangerous combination. So, clearly this situation has already gotten, or will soon be out of control.

The Beth Spencer (Madeline Valdez and River Davidson) arc is long past. At one time Hope was naturally upset in believing her child had died. Thankfully Steffy became the newborn’s adoptive mother, which ensured her care.

In time and through a long, but creatively written storyline Hope learned that the girl Steffy referred to as Phoebe was actually Beth. At the point of climax, Hope came to the cliff house and took her daughter, in what Steffy felt was an overly cold move.

Now, later in storyline time, these blended families had been getting along smoothly. Hope, in particular, no longer saw Steffy as a threat to her relationship with Liam and was feeling good about life.

Bold And The Beautiful Spoilers – Liam Spencer Part Of The Fray

Clifton wasn’t part of the initial scene where Hope was on the phone asking Steffy’s permission to keep Kelly an extra night. As the next part of the tale plays out he’ll be involved with the fallout that follows and attempts to fix it.

Thomas Forrester (Matthew Atkinson) will factor into the tense situation, with Steffy’s well-being coming into full focus. Thomas’ past statements about Liam being an absent father haven’t been forgotten, with the potential of further verbal battles tied into this developing scenario.