The Bold And The Beautiful Spoilers: Ridge Rages At Bill, Blames Him For Forrester Family Problems 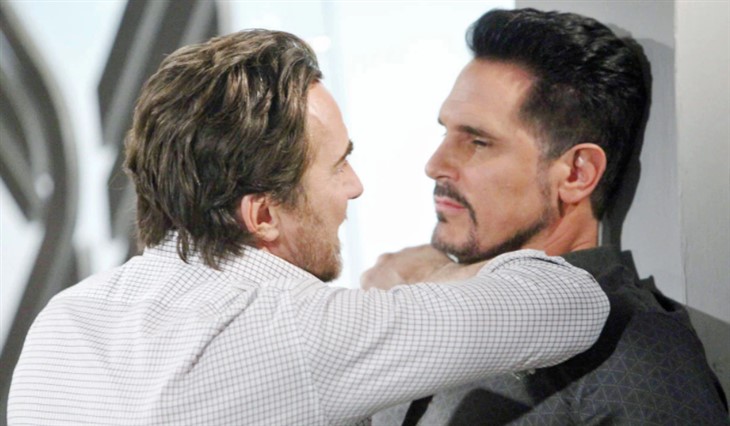 The Bold and the Beautiful spoilers reveal that Ridge Forrester (Thorsten Kaye) has major issues with Bill Spencer (Don Diamont). The designer will confront Bill and during his rageful explosion, will blame Bill for all of the Forrester family problems. This includes Brooke Logan Forrester (Katherine Kelly Lang), as well as Steffy Forrester (Jacqueline MacInnes Wood).

The Bold And The Beautiful Spoilers – Ridge Forrester’s Heartbreak

B&B spoilers reveal that when Ridge and Brooke decided to forgive one another and get back together, they were both excited and relieved. Ridge was looking forward to reconciling and planned to get Shauna Fulton (Denise Richards) to sign the annulment papers.

However, that all changed when he heard Brooke talking to Bill. Even though Brooke said she would love her ex for the rest of her life, Ridge’s real anger is toward Bill

Ridge will end up confronting Bill and lash out at him for interfering so much with his family. However, it’s not just about Brooke. Ridge feels that Bill has caused his entire family a lot of unnecessary pain. Especially his daughter, Steffy.

The Bold and the Beautiful spoilers reveal that Bill and Steffy slept with each other a few years ago. She soon found out she was pregnant, which was a whole other storyline. More recently, Bill is the one that hit Steffy with his car, which led to her injuries. Once Ridge discovers that Steffy has become addicted to painkillers, he will likely blame Bill for that, too.

It was previously teased by head writer and executive producer Bradley Bell that things between Ridge and Bill will get explosive. We already know that the two men are enemies, but things are going to get more intense between them. With Bill continuing to pursue Brooke and Steffy’s injuries turning into a pain pill addiction, Ridge will go into a rage. This could have disastrous consequences.

What do you think is going to happen when Ridge Forrester confronts Bill Spencer? Does he have a right to blame Bill for his family’s problems or is he overreaching? Just how explosive will the fight be between the two men and could someone end up getting hurt? We will have to keep watching the CBS soap opera to see how this storyline plays out.

The Bold And The Beautiful Spoilers: Will Steffy Be Honest With Liam & Finn…

The Bold And The Beautiful Spoilers: Finn Forgives Steffy In Time, But Needs One…