The Young and The Restless News Update: Jess Walton Has Two Thrilling Family Events Coming Up 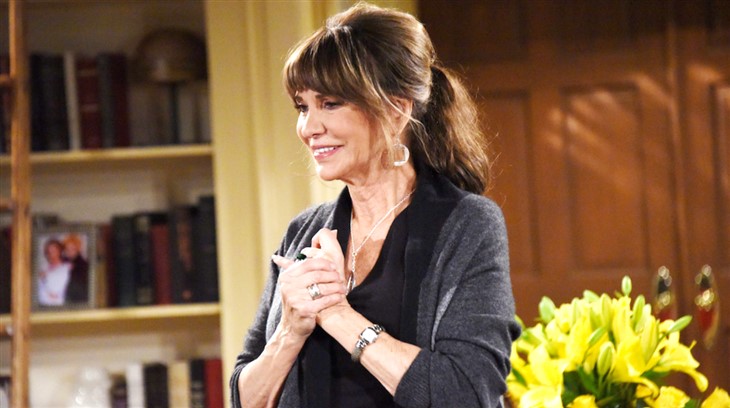 The Young and the Restless spoilers reveal that Jess Walton (Jill Atkinson) is looking forward to two amazing family events to round out the year. First, she and her husband will celebrate a milestone anniversary in December, their 40th wedding anniversary!

Second, Jess has announced the fabulous news that her daughter is getting married.

On her, Insta Jess shared that her daughter, Allison James is about to be married. “My beautiful daughter @allisonmjames_ is getting married! My husband John and I are thrilled to be adding her fiancé, and his adorable son, to our growing family!”

Jess and her husband also have a son named Cody James who is also an actor.

My beautiful daughter @allisonmjames_ is getting married! My husband John and I are thrilled to be adding her fiancé, and his adorable son, to our growing family! ❤️ pic.twitter.com/13d64dt0r9

Jess’s fans were quick to congratulate her with one fan writing, “Congratulations to you and your beautiful daughter. I hope she has a long blissful married life.🎊🎉,” another shared, “Beautiful daughter, beautiful mom! Enjoy your lives as your family continues to grow.”

And other fans wrote, “Congratulations to the happy couple..and parents!!! May you always be as happy as you are today. God bless…”

And more than one fan noted how strikingly similar beautiful Jess and her daughter look!

The Young And The Restless Spoilers – What Is Next For Jill Atkinson In Genoa City?

Back in Genoa City, Jess’s alter ego has also been interacting with her onscreen family, namely her son Billy Abbott (Jason Thompson). She gifted the wayward son with Chancellor Communications, a company designed to keep him out of trouble and on the straight and narrow.

To achieve that she doubled down by adding Lily Winters (Christel Khalil) as his partner. Interestingly, Christel recently spoke about her character, noting that the show is putting women in power positions, such as Lily and Victoria Newman (Amelia Heinle). So far Lily has not really flexed her muscles although that apparently will change.

Fans are also wondering if a new romance will emerge between Lily and Billy. They are sparring a bit in the office but as of yet, there have been no extracurricular activities between them outside of the office. Would you like to see these two feisty characters enter into a relationship or is seeing them work together enough? Tell us what you would like to see happen to Lily and Billy Y&R fans!