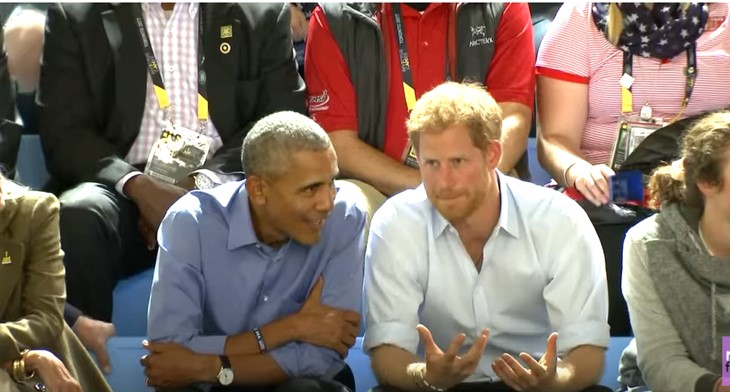 It’s now being suggested that Prince Harry and Meghan Markle didn’t land their new, unbelievably huge Netflix deal. According to Royal commentator Katie Nicholl, it’s “unfathomable” that former President Barack Obama and his wife Michelle had nothing to do with Netflix presenting the Duke and Duchess of Sussex with such a lucrative offer. This is particularly true when one considers the undeniable fact that neither Prince Harry nor Meghan Markle has a shred of credibility in and of themselves when it comes to large scale Hollywood productions.

For those who don’t know, Meghan Markle and Prince Harry signed a multi-year deal with Netflix to produce children’s shows, films, and TV series focused on family-oriented, inspirational messaging. That deal is said to be worth upwards of $150 Million, and reportedly will allow Prince Charles to stop doling out his own multi-millions to Harry and his wife.

Harry And Meghan Evidently Aspire To Be Like Obamas

Many believe that Meghan Markle and Prince Harry are attempting to walk in the footsteps of Barack and Michelle Obama. That’s because, just like the former president and his wife, Prince Harry and Meghan Markle have signed lucrative contracts with the Harry Walker Agency in New York and now also with Netflix.

As Ms. Nicholls pointed out in an interview with BBC Breakfast, “The Obamas are certainly a model that the Sussexes are aspiring to. Not only has the Netflix deal kept the Obamas very much in the public profile since leaving office, but it’s also earned them a huge income. That is something both Meghan and Harry want to do. They have a very tight-knit team over there and as well as that professional team surrounding them, they are certainly taking advice if not from the Obamas themselves.”

Ms. Nicholls didn’t stop there. She went on to suggest that, “The Obamas have denied giving the couple any advice, but I find it almost unfathomable that they wouldn’t have had discussions. Particularly given that the Netflix deal so closely mirrors the deal the Obamas signed.”

Princess Beatrice Borrowed Two Special Items From The Queen On Her Wedding Dayhttps://t.co/NE1DfzokUn

While some, such as Katie Nicholls obviously believe the Obamas are not being altogether truthful concerning any involvement they might have had in securing the Netflix deal for Harry and Meghan, sources for the duke and duchess flatly deny it. An insider was quoted as saying, “The rumors of them having anything to do with this are totally false. The former president and first lady are not advising the couple and have not been in contact with them.”

Of course, regardless of whether the Obamas helped Prince Harry and Meghan secure the Netflix deal or not, the truth is that many haven’t allowed the wool to be pulled over their eyes.

As well-known British commentator, Piers Morgan noted, “This is the same Meghan and Harry who’ve gutlessly run away from royal duty and disconnected themselves from everyone and everything, to become shameless money-grabbing celebrities.”