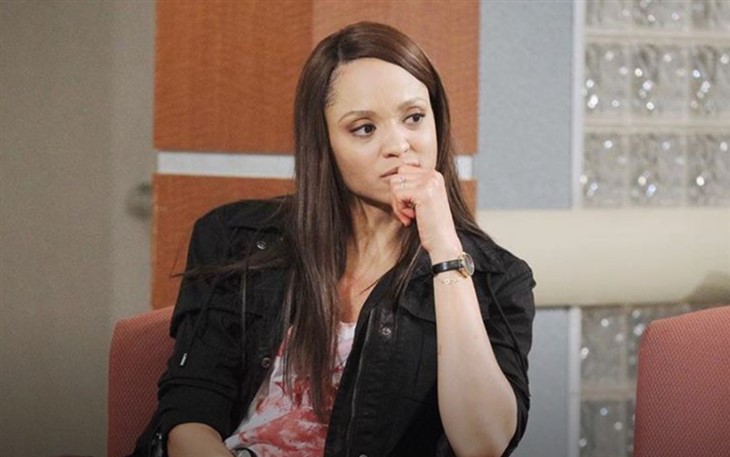 Days of Our Lives spoilers reveal that Lani Price Grant (Sal Stowers) expects her husband to keep his word. However, Lani is asking him to violate his oath as a law enforcement officer. He just can’t do that and ends up betraying her by arresting Kristen DiMera (Stacy Haiduk). When Lani finds out, she goes into a rage at what he has done.

Days Of Our Lives Spoilers – A Difficult Promise

DOOL spoilers reveal that Kristen left her baby girl with Lani while she waited for Brady Black (Eric Martsolf) at the Salem Inn. When Eli walked into his apartment, he realized who the baby belonged to and was furious. He could not believe that once again, Kristen was roping Lani into her troubles. He was going to put out an APB on Kristen, but Lani stopped him. She begged the detective not to say anything and he reluctantly agreed.

It is confirmed that during the week of September 14, Eli will break his promise to Lani. He can’t let a fugitive roam around Salem and not pay for the crime they are accused of. Like he told Lani back when the stabbing happened, everyone needs to have their day in court. When Lani helped Kristen escape, she not only put her job at risk but her freedom as well. Plus, things always look worse to a judge when someone takes off instead of pleading their case.

Days of Our Lives spoilers from TV Guide reveal that Lani will find out that Eli arrested Kristen. She will be furious at her husband and ends up lashing out at him. It’s not really him following the law and arresting Kristen that hurts her so much. It’s the fact that he swore to her that he wouldn’t, then put handcuffs on Kristen the minute Lani’s back was turned.

Eli shouldn’t have told his wife he wouldn’t turn in Kristen, but Lani also needs to understand why the promise was impossible to keep.

It is teased that Eli and Lani’s marriage will be put to the test. It’s not just Eli arresting Kristen that threatens their relationship, though. Lani will take action to make things more complicated for the justice system in the hopes that Kristen will go free.

However, will she end up jeopardizing her marriage in the process? Is this a situation that “Elani” can recover from or will their marriage end before it really begins?