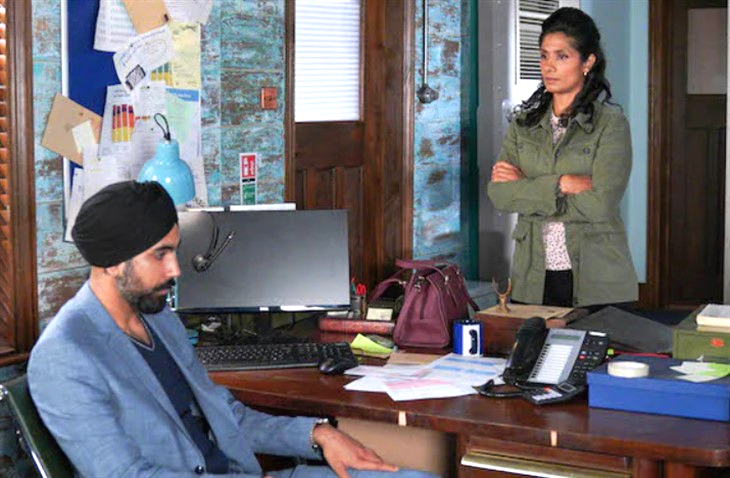 EastEnders spoilers hint that Suki Panesar is worried about her son, Kheerat (Jaz Deol), and his friendship with Chantelle Atkins (Jessica Plummer). When new episodes return, viewers will see that Chantelle meeting up with a divorce lawyer which is seen by Suki.

This will be part of the storyline where Chantelle takes a stand against her abusive husband, Gray (Toby Alexander Smith). Suki has also caught wind of the problems going on with Gray with her seeing that Gray has been causing problems for her son, Kheerat.

During the conversation between Kheerat and Suki after the lady from the trading standard left, Suki told Kheerat about her run-in with Chantelle and warned him to stay away from her due to the situation that they are currently in.

Chantelle is currently trying to find a way out of her current situation which will include asking Kheerat for his help as well. She approaches him with the idea of him loaning her some money which makes him curious about what situation she may be in. Although she wanted to keep the reason a secret from her friend while being able to get the money that would not be able to be tracked by her husband, she may find herself having to come clean about what has been going on.

She did give him a hint before episodes went off about her dysfunctional relationship but soon he may find out just how much trouble that she was in. What do you think? Will Kheerat help Chantelle or listen to his mother? What do you think about the ongoing storyline and Chantelle seeking help from Kheerat?

EastEnders returns back on Monday the 7th with new episodes. Watch EastEnders from Monday and Friday at 8 pm and Tuesday and Thursday at 7.30 pm on BBC One to find out what happens next.