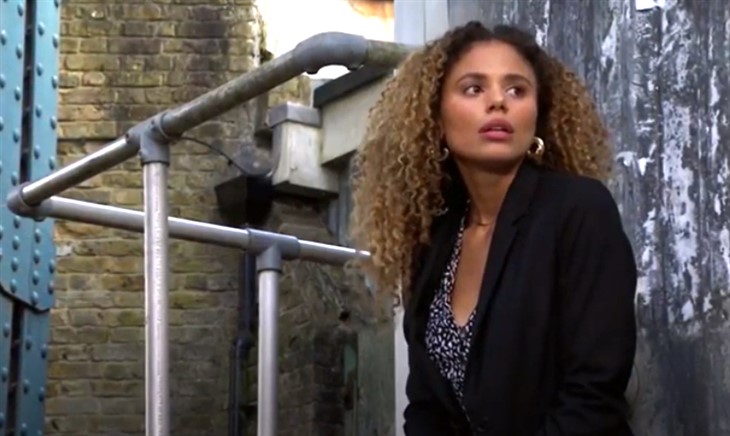 EastEnders spoilers hint that the abuse storyline could end in a tragic situation at the end. The domestic abuse storyline including Chantelle Atkins and her controlling boyfriend, Gray will have a tragic ending which could lead to a shocking death.

Viewers have discovered that Chantelle (Jessica Plummer) has been suffering under the thumb of her abusive and controlling husband, Gray (Toby-Alexander Smith), who has been mentally and physically abusing her for years. Gray has decided to put a tracking device on Chantelle’s phone after years of abuse due to her suspicious behavior.

After she tries to escape from the abusive husband, she will be attacked by him and he will kill her after seeing an advert for divorce lawyers. This is supposed to show the awful reality of domestic abuse and just how far it can go. As many viewers may know, the soap has worked closely with the Women’s Aid and Refuge on this storyline and they even talked with them about what they would put into their scripts. Since July of this year, Refuge went on to report that there has been a rise of about 54% in women who have gotten contact with their hotline in order to get help about an emergency accommodation.

The final scenes that Jessica will be in portraying the character of Chantelle will be aired late in the month. The producer of EastEnders, Jon Sen stated, “Being able to shed light on the realities of what goes on behind closed doors has never been more crucial given the harrowing statistics as a result of the current pandemic, and hopefully Chantelle’s story will encourage people to speak out to someone they trust and get the support that they need. Jessica’s performance is nothing short of extraordinary and even in her final scenes, the audience will be moved by Chantelle’s strength. We’re very sorry so see Jessica go but hope that her impact on viewers is long-lasting.”

As for Jessica, she stated, “It’s been such a privilege to play Chantelle and to be able to tell her story. Sadly what she goes through is all too common and her death is a reminder of the devastating effect of domestic abuse.

I’ve known it wasn’t going to end well for Chantelle for a while now and although it was a shock to find out her fate, far too many men and women suffer in silence so I hope that by raising awareness we can ultimately save lives. I am so grateful to all the team and my lovely cast members for being so supportive, I’ll miss Albert Square.”

Toby went on to state, “We hope that Chantelle’s story gives people the courage to speak out before it’s too late and to know that there are services out there to help.”