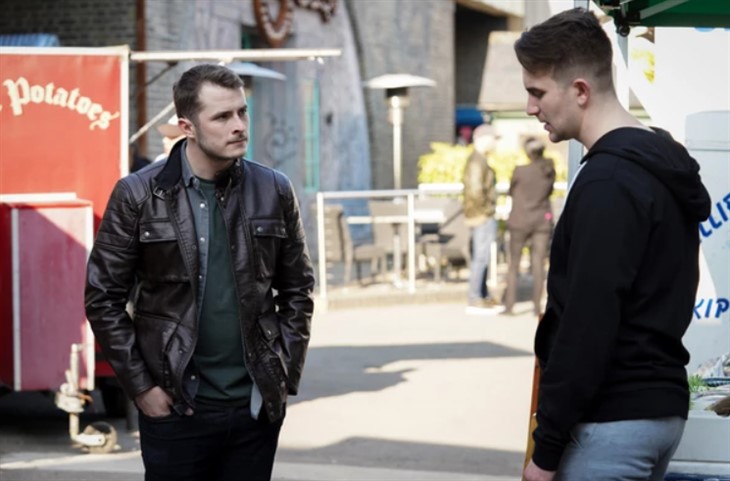 EastEnders spoilers hint that Ben and Callum may run into some problems in upcoming episodes. Things have been difficult for Callum and Ben recently. First Callum is kidnaped and almost dies, then Ben loses his hearing after the boat crashes. Things continue as Ben struggles with his hearing lose and trying to get surgery only to get sick the day of the surgery. However, things begin to turn around as in yesterday’s episode, Ben gets his hearing back. Also, in that episode, Callum saw Ben on the CCTV after he was put on desk duty for excessive force.

Next week, Danny and the Mitchells will face off once again, but Ben will take his relationship into account when going forward, knowing that he has a lot to lose if he makes the wrong decision. Ben will decide to fill Callum in on what has been going on with Danny, including the information he had been keeping from Callum. This will happen while they are getting ready for Stuart’s stag. After hearing the full story, including the latest updates from Ben, Callum will advise Ben to go to Phil about the situation.

Callum Highway Is Faced With A Big Problem

On Callum’s advice, Ben will talk to Phil about what is going on with Danny and will then decide to talk to Jay about what he has planned. It will be interesting to see how this turns out. The popular couple Ballum made up of Callum and Ben gain a lot of attraction when they were first put together and their fan base has continued to grow, so it would be disappointing to see the couple break up which could happen.

As things begin to look up for the two, Callum as Ben if the offer for him to move in with Ben is still on the table. This happiness does not last long as Callum is soon faced with a tough moment as DI Thompson as him about his relationship with Ben. This could cause problems for the couple. What do you think? Will Ben and Callum overcome this or will this end in a break up between the two? Watch EastEnders from Monday and Friday at 8 pm and Tuesday and Thursday at 7.30 pm on BBC One to find out what happens next.