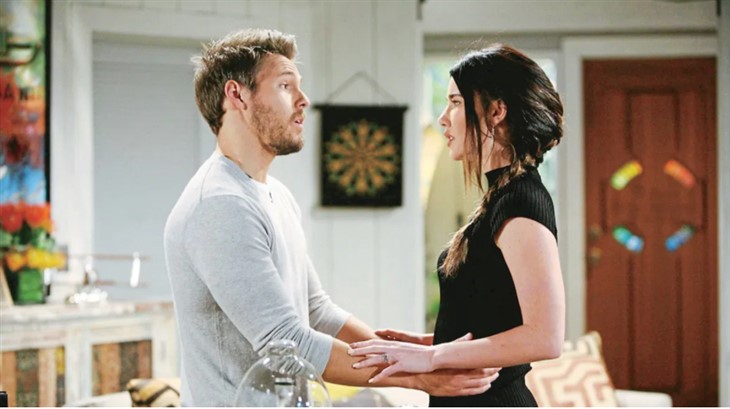 CBS The Bold and the Beautiful spoilers reveal that Liam Spencer (Scott Clifton) doesn’t approve of the doctor making house calls. It was previously teased by Tanner Novlan that Dr. John “Finn” Finnegan could get in trouble with his superiors for blurring the professional/personal line with Steffy. Is Liam responsible for Finn getting in trouble?

The Bold And The Beautiful Spoilers – Liam Spencer’s Selfishness

B&B spoilers reveal that Liam not only is a chronic waffler, but he is a greedy and selfish one. He justifies spending years bouncing between Steffy and Hope Logan (Annika Noelle). Now, he claims to be with only one woman, but he still injects himself into Steffy’s personal life. He keeps insisting on “being there” for Steffy even though she has set boundaries.

The Bold And The Beautiful Spoilers: Ridge Wants To Do It All Over – But With Shauna

Sure, Liam is with Hope now and they have their perfect little family. He claims to want Steffy to be happy and find love again. But he also knows that the more ingrained he is in Steffy’s life, the harder it will be for her to truly move on. For the past two years, Steffy has been alone while having to constantly endure the love of “Lope” being shoved in her face.

When new episodes began airing again, Steffy put up boundaries. She wants to be on friendly terms for Kelly Spencer’s (Colette and Avalon Gray) sake. But no more long therapy sessions. Liam didn’t need a friend to talk to. He knew that as long as he kept hanging around, she wouldn’t be able to move on completely. She told Liam that he can’t be there for her because his life is with Hope. It seems that he just wants to have Steffy kept as a back-up.

The Bold and the Beautiful spoilers reveal that Hope mentioned Steffy having company. Liam’s ears perked up and he wanted to know who was visiting. When Hope mentioned that it was Steffy’s doctor, Liam kept yapping about why Finn would be there. Bill’s comment about Finn’s intentions made Liam’s eyeballs practically pop out of his head.

Novlan mentioned a few weeks ago that Finn’s relationship did start out as professional. He made the first house visit out of genuine concern. He realizes Steffy isn’t a normal patient, so the normal treatment isn’t going to work for her. The professional and personal lines get blurred. The actor hinted that Finn would get in some trouble because of his big heart.

Liam thinks Finn’s house calls are “unprofessional.” Could he report these personal visits to the hospital? That would cause Finn to be confronted by his superiors about the house calls. Liam can pretend he’s concerned because Steffy is “vulnerable.”

However, we all know that Liam just can’t stand that Steffy is moving on. Thankfully, the “Sinn” romance doesn’t seem to be affected. In fact, we will see Finn and Steffy have a passionate kiss!