The Bold And The Beautiful Spoilers: Steffy Rages At Liam After He Finds Her Passed Out 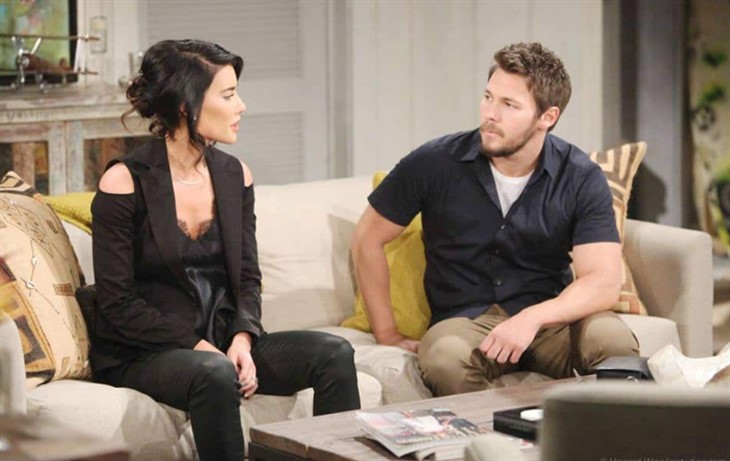 CBS The Bold and the Beautiful spoilers reveal that Liam Spencer (Scott Clifton) will find Steffy Forrester (Jacqueline MacInnes Wood) passed out. He knows that the painkillers are becoming a problem, but can’t get anyone to listen. When Steffy finally regains consciousness, she gets a lecture from her ex. Not in the mood, she goes into a rage and attacks Liam.

The Bold And The Beautiful Spoilers – Steffy Forrester Passes Out

B&B spoilers two weeks ahead reveal that Liam will become even more concerned about Steffy. He has listened to what Hope Logan (Annika Noelle) has observed and knows that Steffy is dealing with something that she is keeping to herself. He will go over to her house and when he gets there, finds her passed out cold.

The Bold And The Beautiful Spoilers: Ridge Wants To Do It All Over – But With Shauna

Liam has been concerned about Steffy and will continue to get the feeling that something isn’t quite right. He was worried when she got a refill on her pain medication the first time around. He thought that she had finished those pills and would be coping with over-the-counter pain relievers by now. But while she is passed out, Liam finds a prescription bottle with Steffy’s name on it. The label indicates that Steffy has more painkillers. Now he finds her passed out and it is clear she’s just not taking a nap.

The Bold And The Beautiful Spoilers – Lecture And Confrontation

The Bold and the Beautiful spoilers reveal that Liam is still at Steffy’s house when she finally starts to wake up. She wonders what he is going in her house, but he has something more important to discuss with her. Liam will tell Steffy that he found more pain pills and wants to know where they came from and why she has them. Steffy claims that she asked Dr. John “Finn” Finnegan (Tanner Novlan) for another refill, so he gave her another prescription. Now, fans know that this isn’t true and Liam is concerned that she is leaning on pain meds too much.

When Liam continues to ask questions and push for information, Steffy will go into a rage and attack him. She lashes out verbally and that is when Liam realizes that Hope was right. Steffy has a lot of anger inside of her and it is so intense. At the same time, both Liam and Hope know that Steffy is usually composed. She doesn’t typically have emotional explosions, but now she has lashed out at both Liam and Hope.

Liam sees how intense Steffy’s rage is over him just being concerned about her well-being. This makes him worry if Kelly Spencer (Colette and Avalon Gray) will end up witnessing or become the target of Steffy’s anger. As he starts to put all the puzzle pieces together, he tries reaching out to Finn, Thomas Forrester (Matthew Atkinson), and Ridge Forrester (Thorsten Kaye). But nobody is listening to Liam’s concerns.

The Bold And The Beautiful Spoilers: Steffy Out Of Control – Liam Shocked, Wants To Take Kelly #bb #boldandbeautiful

So, he decides that he is going to have to take extreme measures to save Steffy and protect Kelly. He decides to get custody of Kelly until Steffy gets help. However, will his plan end up forcing Steffy into recovery or will it just make things worse?