Days Of Our Lives Comings And Goings: Allie Returns and She Is Not Happy With Sami! 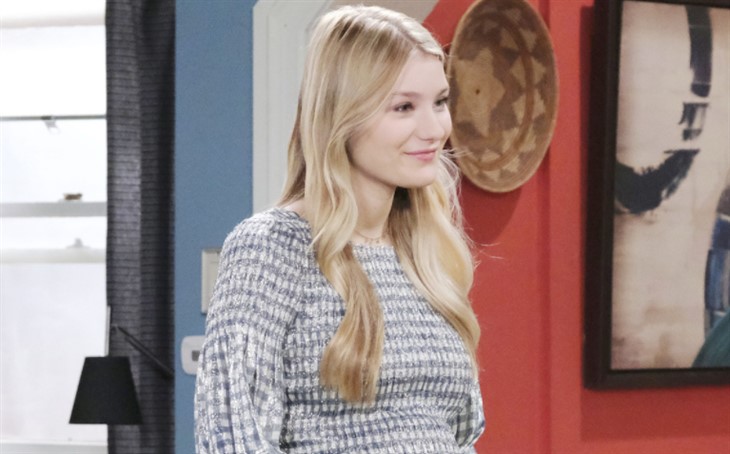 NBC Days Of Our Lives (DOOL) spoilers tease that Allie Horton (Lindsay Arnold) will be returning to Salem very soon. As viewers know, Allie caused quite a bit of chaos when she turned up on Eric Brady (Greg Vaughn) and Nicole Walker’s (Arianna Zucker) doorstep earlier this year.

Allie who was very much pregnant knew that she wasn’t ready to be a mother. She was determined to give the baby a loving home and was torn between giving the baby to Rafe Hernandez (Galen Gering) and her brother Will Horton (Chandler Massey). That’s when Allie’s mom, Sami Brady (Allison Sweeney) returned to Salem with her own ideas about the future of Allie’s baby.

Days of Our Lives Spoilers: Is Marlena Pretending To Be Hattie?

Sami wanted Allie to raise her own baby, with Sami’s help. Allie continued to insist that she wasn’t ready. Sami manipulated both Rafe and Will, with the plan to make sure that if Allie wouldn’t raise the baby herself, that she would keep the child in the family by giving him to Will. She convinced Rafe to turn Allie down. Allie soon gave birth. It wasn’t long before Allie discovered Sami’s manipulations. Furious, she left town, but not before leaving a note that she wanted Eric and Nicole to raise the little boy.

But Sami wasn’t having any of that. She took Eric and Nicole to court and eventually the judge decided in Sami’s favor. Knowing that this is the last thing that Allie would want, look for Nicole to become more determined than ever to make sure Allie’s wishes are honored. The surest wat to ensure this happens to track Allie down herself. While Allie is trying to stay off the grid, Nicole will eventually locate her.

Once Nicole fills Allie in that Sami has custody of her little boy, look for an enraged Allie to return. Allie will likely demand that Sami honor her wishes. In the process, look for Allie to inadvertently reveal who the father is, which will take the custody situation in an entirely new direction. It seems entirely likely that Tripp Dalton (Lucas Adams) will turn out to be the father. Once this comes out, look for Tripp to want to play a role in his son’s life! But will he try to make things work with Allie or remain a single dad?

Days Of Our Lives Spoilers: Ciara Sends Ben Message In Dream, But What Does It Mean? #Days #DOOL #DaysOfOurLiveshttps://t.co/QIu1CjoYqR

Will Nicole convince Allie to return to Salem. Will Sami have to give up custody once the baby’s father is revealed? Is Tripp the father? Anything can happen so stay tuned to Days of Our Lives, airing weekdays on NBC.

And don’t forget to check back here regularly for all your Days of Our Lives news, information, and spoilers!