The Bold And The Beautiful Spoilers: Katie Isn’t Done With Bill – ‘Batie’ Has A Chance 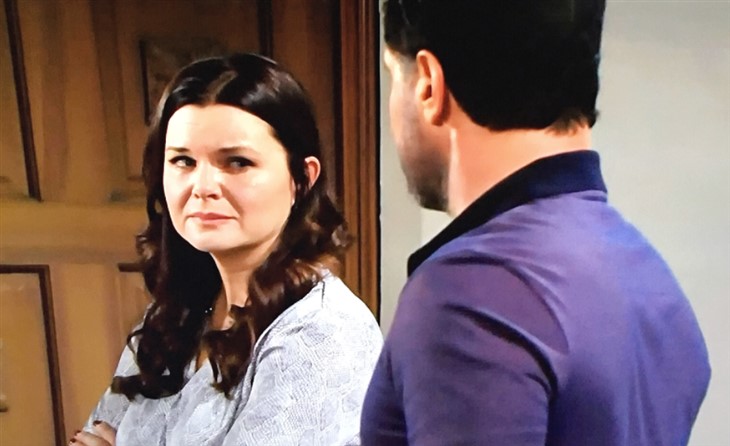 The Bold and the Beautiful spoilers document that Katie Logan (Heather Tom) hasn’t fully reconsidered a Batie revival. But she has opened this storyline’s door a bit, which could be just enough.

The daylight that Bill Spencer (Don Diamont) took immense pleasure in seeing represents the first sign that this likable couple may revive. Bill’s commitment to doing right by Katie came after he realized that pining away for Brooke Logan (Katherine Kelly Lang) was the result of a rebound impulse.

Diamont’s character is determined to reclaim his family. He realizes that, while he loves Brooke, Katie is the woman who’s best for him.

The Bold And The Beautiful Spoilers – Katie Logan Can Think Clearly

It’s not just time, but also proof that Katie needs in order to seriously consider taking Bill back. Batie didn’t have some heated verbal argument, or encounter an unusual event that produced harsh emotion. They didn’t choose to separate over a new wound, but an old one that Bill rubbed raw again.

The vast number of times that Bill and Brooke have danced around each other has seared doubt across Katie’s soul, along with Ridge Forrester’s (Thorsten Kaye). While Ridge is unknowingly caught in a ruse relationship, Katie at least has the ability to contemplate today and tomorrow without an orchestrated marriage clouding her judgment.

Bill appears to get it, which pleasantly surprised Katie. He seems to understand that bold proclamations and grand gestures are meaningless at this point in their relationship. And there is no doubt, they are still in a relationship.

Katie and Bill hadn’t actually remarried during their most recent re-coupling. They wanted to be a family for Will Spencer’s (Finnegan George) sake and became that following Thorne Forrester’s (Ingo Rademacher) decision to divorce Katie.

Bill’s statement, regarding his desire to re-earn Katie’s trust, suggests that he understands the level of emotional damage his actions caused.

The Bold And The Beautiful Spoilers: Steffy’s Spiral Endangers Others, Who And How?https://t.co/Zh51Je5bsA

The Bold And The Beautiful Spoilers – Batie Works For All Involved

As Katie said, she knows that getting back together with Bill would please Will. But she doesn’t want to facilitate false hope.

Encouragingly, Bill’s genuine expression of longing for Katie was returned by the woman he loves. She is best for him. So now the test will become whether Bill can demonstrate that he’s right for Katie moving forward.