The Bold And The Beautiful Spoilers: Finn Backs Liam – Steffy In Trouble 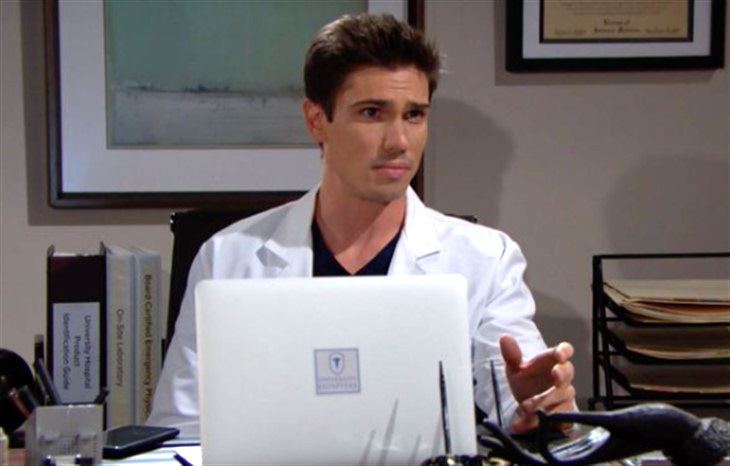 Finn’s sudden influence in Steffy’s life will prove key, as she listens to Liam call out her very troubling behavior. Wood’s character will respond because Novlan’s character will go along with Liam’s demands that Steffy get help.

Coming developments further a topical storyline that is engaging and relevant in modern times, which is the dual intent of B&B’s arc.

The Bold And The Beautiful Spoilers: Liam Interrogates Finn, But Is It Concern Or Jealousy?

Liam has two families. That plot point has been developed within the past few years.

He’s gone back and forth between Steffy and Hope Logan (Annika Noelle), hurting both of them in various ways. But he’s always been fully committed to the daughters he’s had with both ladies.

Kelly Spencer (Avalon and Colette Gray) is Liam’s first-born. She is the connection that’s helped to keep Steffy’s hopes for a Steam revival alive. But Kelly is in danger, as Liam will recognize.

Steffy didn’t want to become reliant on pain pills. That’s why she resisted them at first. Her open statements, regarding wanting to be present for Kelly, reflected a desire to remain alert.

However, the injuries she suffered in the recent motorcycle accident created a pain level that wasn’t present when Steffy was injured years ago in a separate incident. That motorcycle accident took the life of Steam’s unborn son, Aspen Forrester-Spencer (an uncast role due to plot circumstances).

Finn’s refusal to approve more than one refill seems to be based on his professional experience with other patients. Time will prove whether he’s also tapping personal experiences, including those with family, significant others, friends, or even himself.

The Bold And The Beautiful Spoilers – Steffy Forrester Deserves Support

Steffy is a good soul. She’s achieved a lot in her still young life, which created a sense of self-reliance that was unrealistic in this instance.

The Bold and The Beautiful Spoilers and Rumors: Will SORASd To Keep Katie And Bill Story Going? #BB #BOLDANDBEAUTIFUL https://t.co/1GkhxKcTI3

Thankfully she has Liam, Hope Spencer, Finn, her father, brother, and other family members, along with friends who are all looking out for her. This crisis was spotted early, which should give Steffy a good chance to reverse the course. Although more drama would exist if this great actor’s character doesn’t do so quickly.