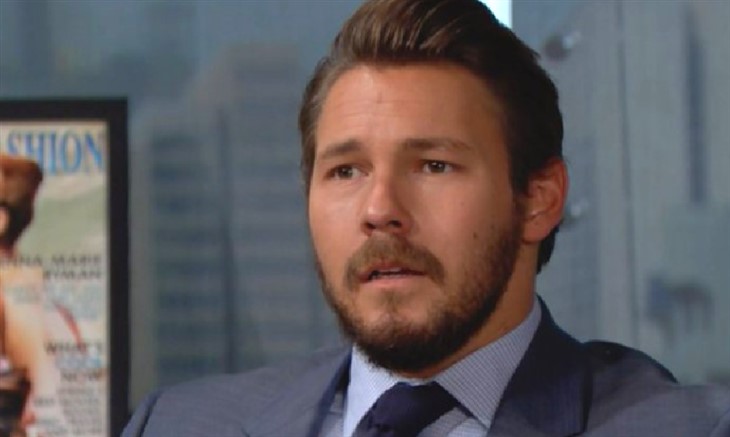 The Bold and the Beautiful spoilers document that Liam Spencer (Scott Clifton) beat his head against a wall when trying to get through to Thomas Forrester (Matthew Atkinson). But the issue Clifton’s character hit hard on is about to be outed.

Steffy Forrester’s (Jacqueline MacInnes Wood) recovery has been compromised, but not in the way that Liam was expressing concerns about. Thomas was having none of his enemy’s theories, as he’s still angry about losing Hope Spencer (Annika Noelle).

The Bold And The Beautiful Spoilers – Finn Makes The Right Choice

Dr. John Finnegan (Tanner Novlan) was spurned by Liam’s visit to his office. He took Liam’s questions, about a personal interest in Steffy, to heart.

Telling Steffy that he could no longer be her doctor, due to his personal feelings, was fully ethical. Wood’s character wasn’t certain what Finn meant at first, but responded with kisses after Novlan’s character made himself clear.

The warm-hearted scenes that were referenced partially affirmed the point Liam was trying to make to Thomas and Ridge Forrester (Thorsten Kaye) in the Forrester Creations’ head office.

There was a period, earlier this year, when the Thomas character was off-screen. During that time reasonable speculation was being offered, in the form of hope, that asked if Thomas was going to return with the intent of fully reforming?

Well, the childish manner in which Thomas yelled at Liam, who was purely expressing his concerns about the mother of his first-born daughter, answers the above question. It is no.

Thomas is treating his family members with compassion and is said to be a better father to Douglas Forrester (Henry Samiri), though viewers can’t confirm that because the child actor hasn’t been seen post production resumption. But Thomas remains otherwise off-course and isn’t perceptive, as he missed the pill drop his friend, Vincent Walker (Joe Lo Cicero), provided to Steffy.

Liam and Steffy maintain a connection, even though Steam is just a memory. Lope and the new coupling that pairs Steffy and Finn will likely spark some conflict.

First, Steffy’s addiction battle takes center stage. On that point, Finn and Ridge will back Liam. Then, it will be compelling to see what happens when Liam comes to learn that Thomas facilitated Vinny’s unlawful substance supply.