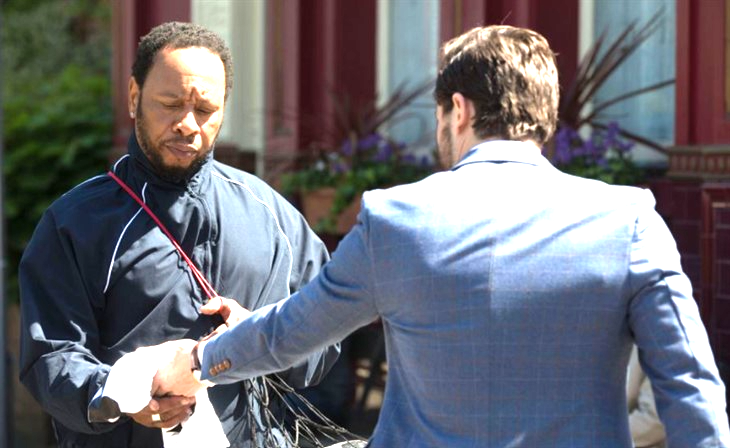 Eastenders spoilers reveal that everyone is having a hard time coping after Chantelle Atkins’ (Jessica Plummer) death. Even though is guilty, he’s not about to tell anyone that. However, he will react to all the pressure. It causes him to lash out at Mitch Baker (Roger Griffiths). He calls him a bad father and hurls other insults at the grieving man.

Eastenders spoilers for next week reveal that the police will still be investigating Chantelle’s death. Even though Gray was questioned after the police were called, they came across new information about the case. They went to Gray to ask more questions and get clarification on a few things.

Even though viewers are worried that Gray will get away with murder, that likely won’t happen on the soap. But it is going to take some time before the truth finally comes out. This is due to Gray being an attorney and knowing how the justice system works.

During the week of September 28, Gray will continue to unravel as the police investigate Chantelle’s death. He also already gone through two police interrogations and doesn’t handle stress well. When Chantelle was alive, he would take his pent-up anger out on her by beating the young woman. Now that she is dead, he won’t have anyone to brutalize. However, he will find other ways to vent his fury.

According to Digital Spy, Gray will lash out at Chantelle’s father. He tells Mitch that he was a horrible father, he tried to turn Chantelle against him, that Gray’s life was a complete misery because of him and all kinds of other insults. Mitch is already grieving and these accusations will cut him deep. Even though he has a lot of inner rages, especially as everyone starts to whisper and talk, he won’t react to Gray’s insults the way viewers might expect.

EastEnders Spoilers: Kheerat And Mitch’s Moment, Both Failed To Save Chantelle https://t.co/fYmkv70QtF pic.twitter.com/nu6WlsX7W9

While listening to Gray attack him verbally, Mitch will end up agreeing with him about everything. Then, the man completely breaks down emotionally. Gray’s cruel act will just intensify Mitch’s grief. However, Gray can’t hide from the truth coming out much longer.

Eventually, he is going to have to answer for causing Chantelle’s death. At least, that is what viewers are hoping for. It wouldn’t be right for this long storyline of domestic violence to end with Gray getting away with murder.