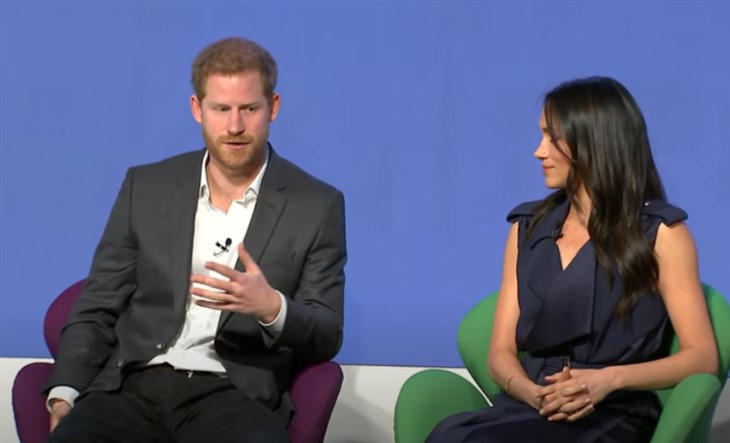 Because of the incessant yapping the Duke and Duchess of Sussex appear intent upon, those who appreciate the non-partisan nature of the British Royal Family have begun to lash out at the couple.

For example, social media users began a Tweetstorm following Harry and Meghan Markle’s ABC video, with one Tweeting, “Why are a UK prince and his wife getting involved in a US election? What business is it of his? Didn’t we fight a war to end interference from the British Monarchy?”

Another furiously left a comment on the ABC video on Youtube, saying, “Nobody likes them doing American politics. He is a prince of another country meddling in American elections. Remove the titles first and then vote. They know they are not liked.”

Prince Harry Knows He Shouldn’t Be Speaking On American Politics

Some observers have claimed that Prince Harry is actually uncomfortable with his role at Meghan Markle’s side. He appears awkward and leans away from Meghan. One Youtube commenter even wrote, “Body language between them looks interesting.”

Still, Harry is following along in his wife’s footsteps and getting political in a way that no other British Royal has dared to do since the days of King George III.

As yet another social media user Tweeted following the airing of the video, “If Meghan is a registered voter then she should vote but I don’t quite get Harry’s participation in all this. It makes him look idiotic.”

Another took both Harry and Meghan to task for their evident hyper-partisanship. “This is once again Meghan & now Harry directly entering into politics. They’re obviously encouraging people to vote in this ‘crucial election’ for Dems as M is outspoken about her friendship with Obama & hatred of Trump. Unacceptable for RF members.”

Some might feel that attacks on Prince Harry and Meghan on this issue are simply those of Trump supporters. However, that wouldn’t be a true assumption since even left-wing British citizens have suggested that Harry and Meghan should lose their titles for their obvious election interference.

For example, former Liberal Democrat MP Norman Baker said of Meghan and Prince Harry, “You can’t be one foot in, one foot out. You are either a member of the royal family or you are not.”

Yet another left-wing, British politician from Kent, Brendan Chilton, a Labour councilor hit at Prince Harry and Meghan, saying that, “This is all very well and good but why are we allowing a Royal to comment on the electoral process? If they want to engage in any form then give up the titles and be ordinary. If you want to keep the titles- with all the trimmings, then zip it.”

Prince Harry And Meghan Making Enemies In The USA

After ditching the UK for the USA and setting up shop in the ultra-exclusive Montecito neighborhood of Santa Barbara, and signing a beyond-belief deal with the American media giant, Netflix, one would think Harry and Meghan would focus on their own lives.

However, that hasn’t been the case and everyone has watched as Prince Harry and Meghan Markle have used their incredible (unearned) privilege to push themselves into the American spotlight. Because of the blatant hypocrisy involved (recall that Harry and Meghan just wanted privacy and normal life), regular folks are disgusted with the Duke and Duchess of Sussex.

The entire American public’s frustration with Meghan Markle and Prince Harry can be summed up in a sentence, that one social media user wrote: “Dear UK, Please take these wingnuts back.”