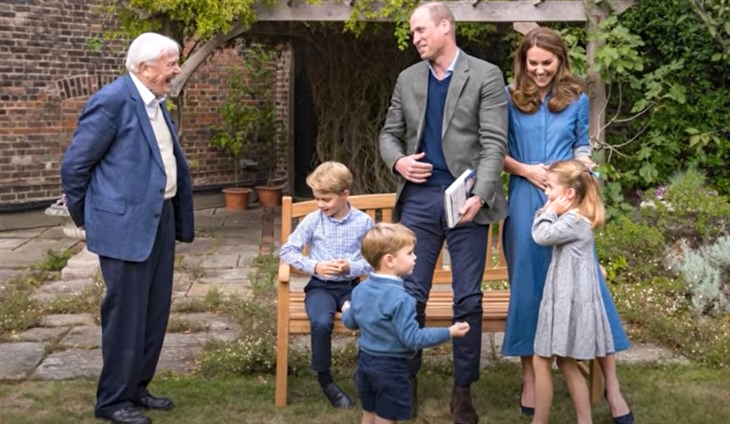 Thursday afternoon was a movie day for Prince William and his family and they didn’t have to travel far to see a plum premiere.

That’s because Sir David Attenborough dropped his latest documentary in the Cambridge’s back yard, and afterward, he dispensed a special souvenir to one of the youngest members of the royal family.

Present at the Kensington Palace garden party was the esteemed director who screened David Attenborough: A Life On Our Planet, William, Kate, Princes George, seven, and Louis, two, and Princess Charlotte, five. Following the film George was gifted with a sizable extinct shark tooth from 23 million years ago, which was found by Attenborough in Malta in the 1960s.

Meghan And Harry ‘Made UK Great Again’ – When They Left, According to Former Trump Advisor

Sir David Attenborough Is A Naturalist, A Conservationist, And A Director

A Palace aide said, “The children are massive fans of Sir David and this was the first time they had met him, although they have always wanted to … They were fascinated by the shark tooth and Sir David explained how he had found it, how old it was and how it had been preserved in Malta’s soft yellow limestone.”

The family and director kept an appropriate social distance and William and Sir David sat in directors’ chairs with their names on the back of them. After the 80-minute film, Sir David gave William a copy of the accompanying book.

According to a Palace aide, William praised the film as Sir David’s best ever.

Last year William interviewed Sir David at the World Economic Forum in Davos, Switzerland, and in 2019 William and Kate had the distinction of naming a polar research ship after Sir David. At that time Kate told Sir David that her kids were upset that they could not go along and meet him.

David Attenborough: A Life On Our Planet will be available for viewing on Netflix starting on October 4. The accompanying book is due out on Thursday.

The latest film release by Sir David was originally scheduled to be released to theaters in April, along with what would have been a showy premiere at the Royal Albert Hall. But then COVID happened.

Who Said Prince Harry And Meghan Markle Made Britain Great Again By Leaving, I Hope They Do The Same For Us? #princeHarry #MeghanMarkle https://t.co/0r1VXNwERz

Like productions worldwide, the film was shelved as people stayed home and the world became a study in isolation. When the restrictions surrounding the coronavirus lockdown were eased the film’s producers chose to finally release the film for public consumption.