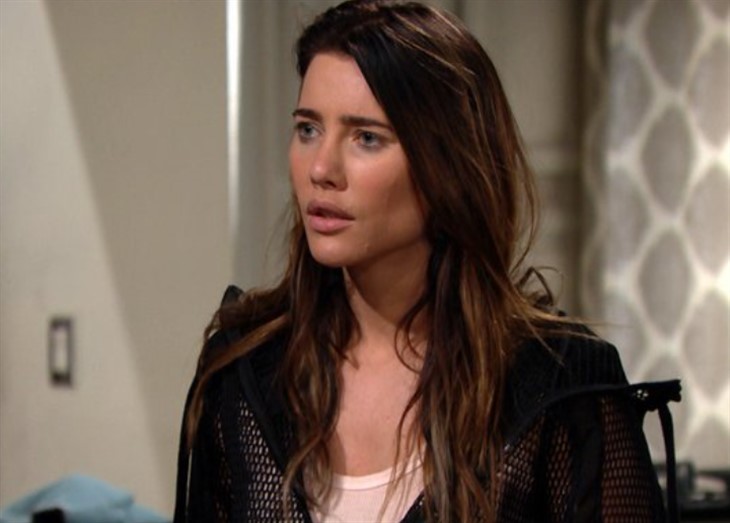 The Bold and the Beautiful spoilers document that Steffy Forrester’s (Jacqueline MacInnes Wood) addiction admission will propel this dynamic arc to its next stage. Dr. John Finnegan (Tanner Novlan), who was introduced shortly after the first new episodes were broadcast following the production shutdown, will lead Steffy’s recovery efforts.

The Steffy-Finn connection was telegraphed from the moment their eyes connected in the hospital room, where Wood’s character found herself after a second terrible motorcycle accident. While this crash didn’t include loss of life, it did leave her feeling vastly different than when she lost the baby she and Liam Spencer (Scott Clifton) were going to have many years ago in storyline time.

Steffy’s instincts proved apt, as the pain she was feeling proved unmanageable. Her belief that prescription medication wasn’t a good idea was also prophetic.

The Bold And The Beautiful Spoilers – Thankfully Liam Spencer Was There

Liam left Steffy a number of times through the years. But he’s stayed connected and has always been in regular contact, even when they weren’t together, following Kelly Spencer’s (Avalon and Colette Gray) birth.

It’s chilling to think about what could have happened if Liam hadn’t gone to the cliff house because he was concerned about Steffy’s care. At the time he believed that Finn wasn’t being objective about her care.

Kelly was never in any serious danger, as she was in her room after Steffy chose to take the underground drugs Vincent Walker (Joe Lo Cicero) provided. But that situation was not going to continue, as Liam took Kelly from the house.

The start of what actually was an intervention happened at Brooke Logan’s (Katherine Kelly Lang) house. She, Liam, Hope Spencer (Annika Noelle), and later, Ridge Forrester (Thorsten Kaye) confronted Steffy, who denied she had a problem while also pulling a knife.

Wood’s performance reverberated through television and digital screens as one of the more memorable in recent show history. If this actor were on stage and the audience was live in a theater, a booming, sustained standing ovation would have occurred at the end of the play after the curtain re-opened. It was quite simply that great.

Later scenes will take place at the cliff house, with Liam, Ridge, and Finn pressing Steffy to acknowledge that she has a problem.

The Bold And The Beautiful Spoilers – Full Upswing, Or More Turns?

This storyline has already taken some unexpected turns and produced surprising twists. So would B&B present a smooth, linear recovery from here?

The Bold And The Beautiful Spoilers: Steffy’s Spiral Intensifies, Even Finn’s Not Enough https://t.co/2li15QbJvt pic.twitter.com/aNqRQWIix6

Steffy’s relationship with Finn could become the focus, as they’re set to naturally bond during a critical period in both of their lives. But now that Steffy’s will and judgment have come into question her loved ones and the audience should be uncertain about what happens next.