The Bold And The Beautiful Spoilers: Quinn’s Overconfidence Will Be Her Downfall – Brooke Hasn’t Let Ridge Go 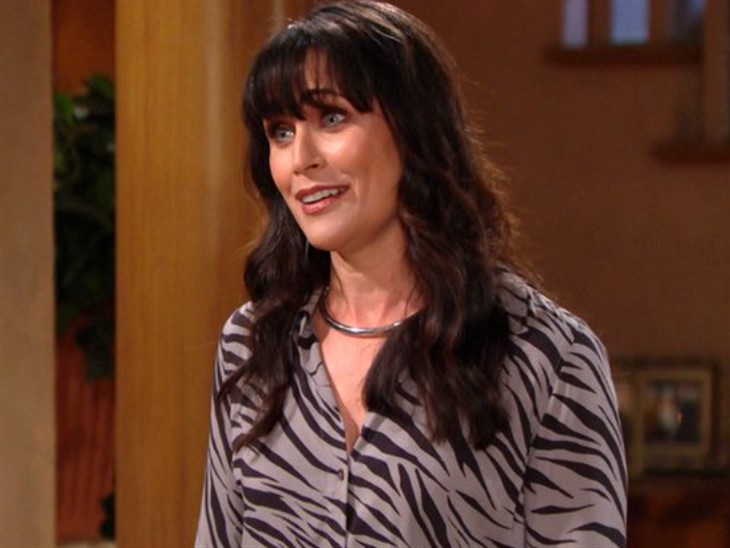 The Bold and the Beautiful spoilers document that Quinn Fuller Forrester’s (Rena Sofer) overconfidence puts her and her supposed best friend in ongoing jeopardy. Shauna Forrester (Denise Richards) hasn’t been seen with Ridge Forrester (Thorsten Kaye) in a few weeks. But the newly married couple is fine, for now.

Brooke Logan (Katherine Kelly Lang) will never let Ridge go, regardless of whether he’s married to someone else or not. He’s the one true love of her life.

The paused storyline, where Brooke’s suspicions about whatever Shauna and Quinn did to end Bridge and create Shidge soon resumes, as Richards brief cast departure ends.

Quinn does love Eric Forrester (John McCook). But she openly defied his pleas that she lay off Brooke months ago. Then, Quinn went beyond that and sabotaged Bridge in order to create a manipulated wedding between Ridge and Shauna.

Eric was deeply disappointed in Quinn last spring. He, like the gathered crowd at Brooke’s home, was appalled after she uploaded an unsettling video that everyone was forced to watch that showed Brooke and Bill Spencer (Don Diamont) kissing.

Quinn was unapologetic in the days that followed her shameless act. She told Eric that everyone deserved to learn who Brooke really was. But in reality, Quinn was cloaking her own personal while humiliating Brooke.

Talk about Brooke investigating what happened on the strip in Las Vegas, Nevada, made sense. Possibly, over time, she’d gain information about Shauna’s friend who owned the wedding chapel and the real story about Shidge’s wedding would come out?

Another area of attack was the manner in which the divorce papers were filed. That seems like the harder plot nut to crack because Ridge’s text records won’t show evidence of Shauna having typed in the message. But another angle appears to be played by B&B that allows the truth to be revealed.

The Bold and the Beautiful Spoilers: Paris Buckingham Shakes Up B&B and Zoe’s Life #bb #boldandbeautiful

The Bold And The Beautiful Spoilers – Upcoming LA Wedding

Quinn thinks she’s helping Shauna secure her tie to Ridge. The suggested wedding ceremony, to be held in Eric’s mansion, will be a public affirmation of who Ridge wants to be with.

Sofer’s character wants Brooke to be present to witness the event. It would be good soap to see that happen. What would be best is if the teased event also includes a full reveal of the scams that led to Bridge’s end and Ridge’s marriage to Shauna.