The Young and The Restless Spoilers: Baby Daddy Confusion Ahead? Elena Went From Devon To Nate The Same Night! 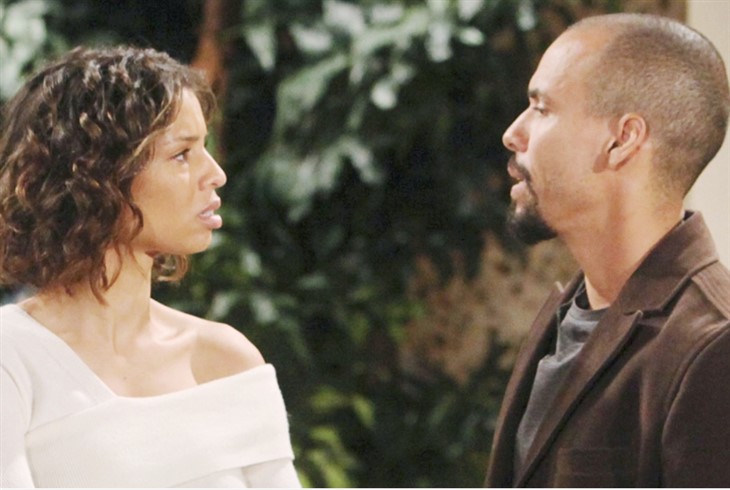 CBS The Young and The Restless spoilers tease that there may be some baby daddy confusion ahead! Elena Dawson (Brytni Sarpy) went from Devon Hamilton (Bryton James) to Nate Hastings (Sean Dominic) the same night!

The Young and The Restless Spoilers – Devon Hamilton And Elena Dawson Have A Picnic In The Park, Go Home And Make Love

Viewers will recall that Devon and Elena had a lovely picnic in the park in a recent episode of the show. They talk things out about Devon’s reactions to finding out that Amanda Sinclair (Mishael Morgan) is his late wife’s twin. Devon had a very difficult time moving on from Hilary Hamilton (Mishael Morgan), and Elena had to compete with his memories of her.

His whole penthouse was full of photos and belongings of Hilary. When Elena moved in, she had to literally force him to get rid of the shrine of Hilary he had there!

So now, Devon helping Amanda to learn about her twin is something Elena is very nervous about. Elena has a lot of insecurities as well. She is afraid that all the pull to the past and Hilary might draw him to Amanda! Devon assures her that he is not drawn towards Amanda. He tells her that while he didn’t mind helping Amanda with some information, he had given her all he was going to. After all, was Hilary alive, he’d be Amanda’s brother in law. He understands Amanda may feel some family connection to him. If he were to feel a connection to her it would also be a family connection.

The Young and The Restless spoilers reveal Devon and Elena then return home to the penthouse and make love. Elena dozes off on the couch afterward. She heard him tell her she was so beautiful she took his breath away. But then she realized he wasn’t referring to her, as she saw Amanda coming down the stairs! Devon told Amanda how proud he was of her for how she has built her career. Amanda told him they were building a life together! That was all Elena could take – she told Amanda that she and Devon have just made love and talked about THEIR life together!

The Young and the Restless Spoilers: A Cranky Chloe Goes Into Labor, Makes Things Difficult For Kevin https://t.co/jwqoZmTP5a pic.twitter.com/3zBy45IVg6

Devon, on the other hand, told Amanda he wanted her from the first time he saw her – totally ignoring Elena! But it was only a nightmare – and Devon shook her awake. He asked her if she was okay, and she said yes. He could tell something was troubling her but she denied anything was wrong. Then she got a call to go to the clinic to help Nate. So she took off and told him she wasn’t sure how long she would be gone.

Devon understood. But when she got to the clinic, there was an emergency with Jared (Michael Maclaine). He had overdosed and they had to treat him. Things got serious, but they got him out of the overdose. After they got him on his way to rehabilitation, things got emotional.

Then things got physical and it escalated into Nate and Elena making love on the exam table! Afterward, neither could believe they’d allowed it to happen – and both felt very guilty! With Elena having sex with both men on the same night, can an unexpected pregnancy be far behind? Naturally following would be a who’s the baby daddy story!