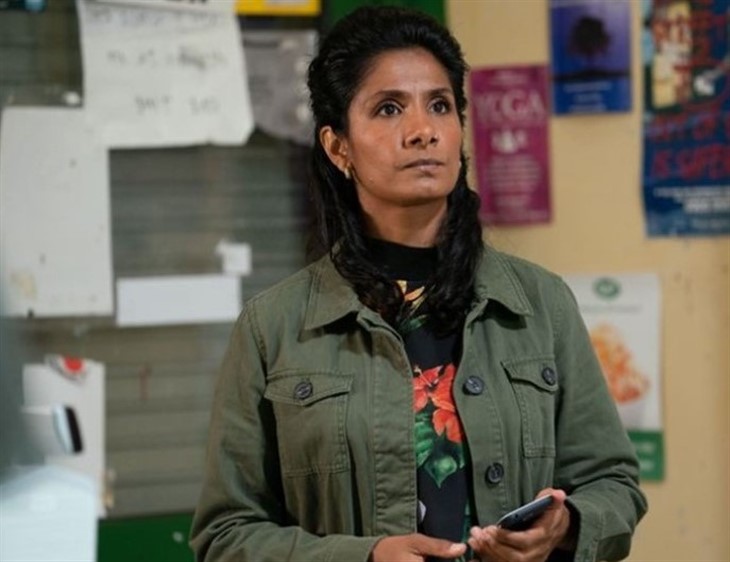 BBC Eastenders spoilers reveal that Jags Panesar (Amar Adatia) finally came clean about his romance with Habiba Ahmed (Rukku Nahar). Suki Panesar (Balvinda Sopal) was not pleased but played nice. She then left because she had a prior engagement, which was handing over Jag’s bloody jeans to the police. Her betrayal wasn’t about Habiba, it was to protect the family.

On Monday’s episode, Jags made a big decision and had his family gather at the pub. He decided to come clean and admitted that he is in a relationship with Habiba. She even made a nice gesture by giving Suki a cupcake. The Panesar matriarch was definitely not pleased and did not approve of the relationship. However, she kept quiet and headed to her mysterious appointment.

Eastenders spoilers reveal that Suki would commit the ultimate betrayal. As we previously speculated, the matriarch turned her son into the police. She even handed over his bloody jeans to make sure it was an easy arrest. Now, there is one thing about Suki and that is no matter how much of a villain she is, she is all about her children. So, this might have been surprising to some viewers, but there is a method to her madness.

According to Express, when Ash Panesar (Gurlaine Kaur Garcha) finds out what Suki did, she will be horrified. Suki will do just about anything to protect her kids, so her turning in her own son to the police will shock the whole family.

Eastenders spoilers reveal that Suki didn’t turn in Jags because of her disapproval of him dating Habiba. She made an appointment with the detective before that. She made the decision when she found Jags bloody jeans.

Even though she has tried to save him from all of his mistakes, Jags is careless. Suki couldn’t risk any loose ends or evidence laying around. You have to be prepared for anything when you’re covering up crimes! With all of the bad decisions Jags has made and how much Suki has saved him, the jeans made her realize that he was continuing to not think. Suki loves her son, but her ultimate goal is to protect the entire family unit.

She has mentioned before how important it is not to have the police looking at their family. She said this to Kheerat Panesar (Jaz Deol) when he wanted to talk to the police about Chantelle Atkins’ (Jessica Plummer) death. In Suki’s mind, she sacrificed one son to save the rest of the family and she will make no apologies for that.