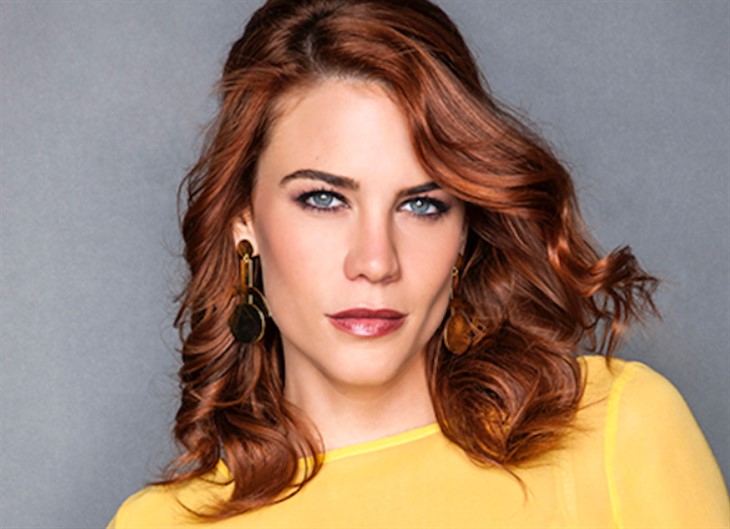 The Young and the Restless spoilers indicate that Sally Spectra (Courtney Hope) will be making her grand entrance in Genoa City soon.

In August, news broke that Hope had been let go from The Bold and the Beautiful, where she played Sally Spectra for three years.

Two weeks later, Hope announced that she had joined Y&R. Since then there’s been mystery surrounding who she would play.

But now the mystery’s over.

Earlier today, Hope took to Instagram to reveal she would be bringing Sally Spectra to Y&R. In the photo, Hope is standing in front of her Y&R dressing room with Sally’s name on the door.

The Young And The Restless Spoilers: Chelsea Goes On An Unexpected Trip – Will She Be Kidnapped? She’s Stuck In An Elevator!

The Young And The Restless Spoilers – Last Appearance On B&B

Courtney Hope originated the character of Sally on B&B in 2017. As the niece and namesake of the original Sally Spectra, the young fashion designer set out to prove herself in the fashion industry.

Throughout Sally’s time in Los Angeles, she competed against Forrester Creations in the fashion industry. When Sally’s company Spectra Fashions went out of business, she was hired as a designer at Forrester.

Sally became a fan favorite with her quirky and lovable attitude, along with her flair for fashion. However, during her final months with the show, her character’s personality took on a dark side.

Sally became obsessed with winning back her ex-boyfriend Wyatt Spencer (Darin Brooks), who dumped her for Flo Fulton (Katrina Bowden). As part of her plot, Sally pretended she was dying in order to have Wyatt come back to her.

Her plot worked for a while until Flo caught on to her scam. Worried that Flo would expose her plan, Sally kidnapped her. However, Flo managed to get word to Wyatt who came to her rescue.

During the fallout, an emotional Sally revealed the reason for her actions and begged Wyatt for forgiveness.

Sally didn’t face any punishment for her actions but was scrutinized by other people. With nothing left in Los Angeles, it seems the redhead is ready to make a fresh start in a new town.

Like other B&B characters, Sally is planning to set down roots in Genoa City. Sally’s appearance on Y&R will be a welcome relief from all the current drama going around.

But what does Y&R have in store for Miss Spectra?

Odds are Sally will be working for one of the companies in Genoa City. Lauren Fenmore (Tracey Bregman) was a good friend of Sally’s aunt, so she could possibly bring the designer on board at Fenmore’s.

Jabot is another possibility for Sally’s job with Kyle Abbott (Michael Mealor) anxious to hire her.

Aside from her work, Sally’s love life is also going to be a focus on Y&R. The question is who she will be with.

Kyle is a leading candidate, but at the moment he’s caught in a battle between his fiancée Summer Newman (Hunter King) and ex-wife Lola Rosales (Sasha Calle).

The Young And The Restless Spoilers: Adam Newman Ready For War – Billy Doesn’t Stand A Chance?https://t.co/gbQyC7vm2o

With Kyle out of the running, Theo Vanderway (Tyler Johnson) is the next logical choice. Like Sally, Theo’s deemed as an outcast and has faced his share of struggles. Plus, he also has his mischievous side just like the redhead.

With Sally and Theo together, there’s no telling what trouble they’ll create in Genoa City.