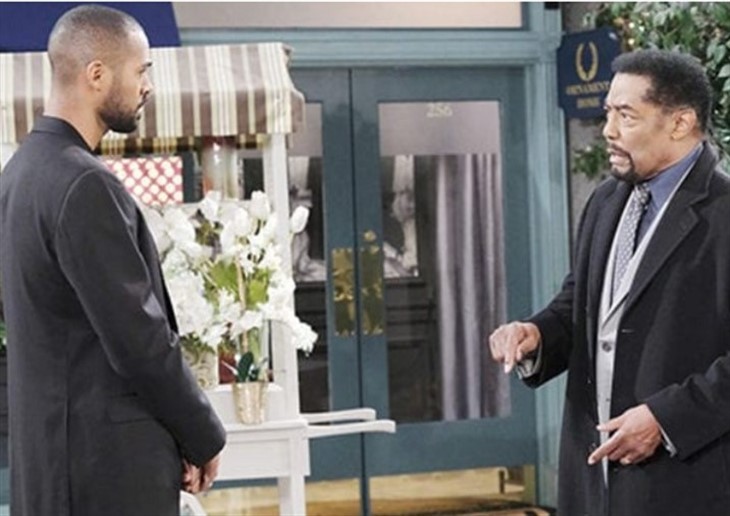 Days Of Our Lives – Melinda Trask (Tina Huang) Eli Grant (Lamon Archey)to give her evidence that will convict Kristen DiMera (Stacy Haiduk) or his pregnant wife will go to prison. Eli did secretly tape Kristen confessing to the crime, but he might not hand it over to the DA. When he opens up to Abe Carver (James Reynolds), will he take action?

DOOL spoilers reveal that Lani Price Grant’s (Sal Stowers) actions are coming back to haunt her. In order for Eli to prevent the DA from prosecuting Lani for helping Kristen escape, he must get a taped confession. The detective loves his wife and they are expecting twins. He will do just about anything to save her, even if that means going behind her back to nail Kristen.

Days Of Our Lives News Update: Lucas Adams Is Celebrating A Special Milestone!

Eli pays a surprise visit to Kristen at the Salem Inn. He lashes out at her for getting Lani involved in her mess. He explains that Melinda is going after Lani for helping her escape and he demands that Kristen do something about it. The detective keeps talking until Kristen mentions that she stabbed Victor Kiriakis (John Aniston). Of course, she has no clue that Eli is secretly recording her confession and plans on delivering it to the DA.

Days Of Our Lives Spoilers – Confiding In Abe Carver

Days of Our Lives spoilers reveal that Eli has every intention of handing Kristen’s confession to Melinda. However, he begins to question if that’s the right thing to do. He struggles over his dilemma and it is suggested that he might not give the DA what she asked for. It is also teased that Eli opens up to Abe, who is not only the mayor but also Lani’s father. Will Eli end up telling Abe that Melinda is threatening to send Lani to prison?

In the new issue of Soap Opera Digest, it is confirmed that Kristen ends up going to the police station and giving a full confession. Now, she wouldn’t need to do this if Eli had given Trask the secret recording. The magazine also states that Lani and Brady Black (Eric Martsolf) have a “strong reaction” to Kristen confessing. However, she didn’t really have much choice. Lani has sacrificed and risked everything to help her, so it wouldn’t be right for Kristen to sit by and watch her lose everything.

However, there might be a silver lining to this story. If Eli tells Abe that Melinda threatened to send Lani to prison, the mayor might take action. We will have to see how this storyline develops.