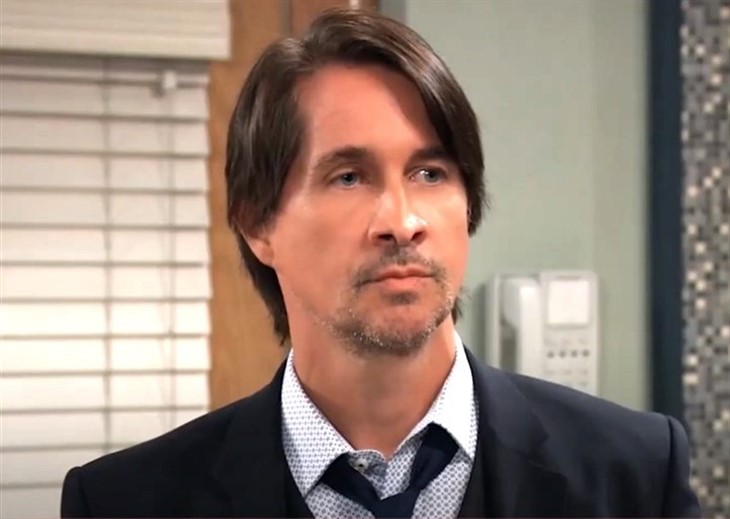 ABC General Hospital (GH) spoilers tease that Dr. Hamilton Finn (Michael Easton) and Jackie Templeton (Kim Delaney) won’t be calling a truce anytime soon? But why does Finn hate Jackie so much? It seems they may have shared more and a stepmother/stepson relationship. But was Finn with Jackie before she married his dad? Is that the reason for Finn’s anger? And if that’s the case, could Harrison Chase (Josh Swickard) be Finn’s son, and not his brother?

It seems that Finn and Jackie dated before she married Finn’s father. It is probably safe to say that Finn introduced them and at some point, Jackie left Finn for his own father! But what if she found out she was pregnant shortly after leaving Finn? Or perhaps they did actually have an affair after she was married. Either way, it seems like a very strong possibility that Finn is Chase’s father. But does Finn suspect the truth?

Viewers may recall that when Chase first showed up in Port Charles, Finn wanted nothing to do with him. They had never really been close because Finn left the family home before Chase had been born. But Chase was determined to forge a relationship with Finn and he eventually gave in. But Finn hasn’t forgiven his father or Jackie quite so easily. Regardless of when they were together, Jackie eventually chose Finn’s father over him. That’s why Finn wasn’t all that eager to get to know Chase, he’s a reminder of that heartbreak?

When Chase showed up, Finn might certainly have realized that Chase could be his son, given his age. Chase has no idea about any of this, so look for it to turn his world upside down if he has been wrong about his parentage all his life. It’s obvious there is still a spark with Jackie, but does Finn still have feelings for her deep down? Could they end up rekindling their old passion? Where would this leave Anna Devane (Finola Hughes)? Anna and Finn are busy planning their wedding, so this could be a very explosive situation.

GH Spoilers – What Will Happen?

Will Finn eventually make peace with Jackie for Chase’s sake? Is it possible that Finn is Chase’s father? How would that impact their relationship? Do Jackie and Finn still have feelings for each other? Could they act on those feelings before Finn walks down the aisle with Anna? Only time will tell, so stay tuned to General Hospital airing weekdays on ABC. And don’t forget to check back right here regularly for all your General Hospital news, information, and spoilers!