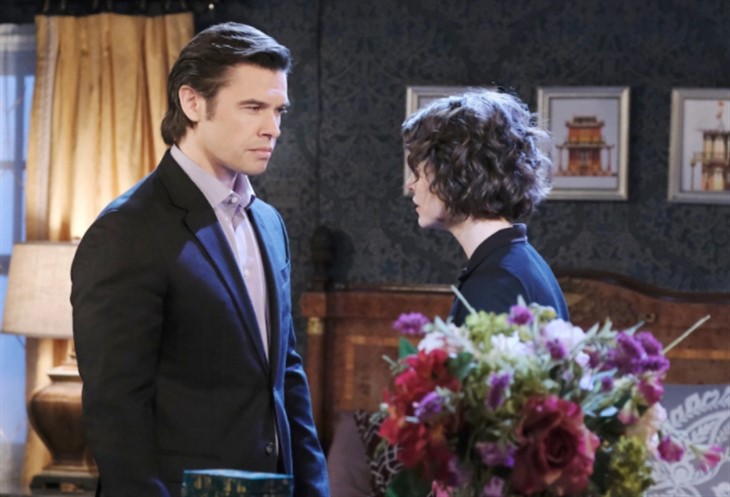 NBC Days of Our Lives spoilers reveal that Philip Kiriakis (Jay Kenneth Johnson) and Sarah Horton (Linsey Godrey) will share a close moment. Sarah’s hand is on Philip’s arm and he tells her how beautiful she is. Then Xander Cook Kiriakis (Paul Telfer) walks in and goes completely berserk! The good doctor probably isn’t going to react well to Xander’s macho theatrics.

DOOL spoilers reveal that Philip is going to do anything to get under Xander’s skin. However, his ultimate goal is to get him out of Titan, away from the Kiriakis mansion, and eliminated from Victor Kiriakis’ (John Aniston) orbit. Philip was pleased when his plan to get Xander fired work. However, the scheme hit a snag and Xander is not just going to walk away.

In the promo clip, Philip and Sarah are sitting on the couch. She puts a reassuring hand on his forearm as if she is comforting him. He has probably made some sort of “confession” or told her a story that tugged at the heartstrings. That’s when Philip tells her how beautiful she is. Of course, he just happens to say these words when he knows Xander is within earshot.

Days of Our Lives spoilers reveal that when Xander sees Philip moving in on his woman, he goes completely berserk. He literally leaps across the living room to tackle Philip. In Xander’s mind, he is protecting Sarah… and what he thinks belongs to him.

However, it is an extreme reaction when nothing happened between Philip and Sarah. But this is exactly the type of reaction that the Kiriakis heir was counting on. Xander fell into his trap and to everyone else, Philip looks like the victim.

Xander finally was getting everything he ever wanted. Then, he was forced to share the CEO position. Next, Philip tattled to Victor Kiriakis (John Aniston) and got him fired. Now, he is trying to seduce Sarah. What we expect will happen in the next few weeks is that Philip will work on making Xander look unstable, paranoid, untrustworthy, and dangerous. And it’s probably going to work since Xander is known for his knee-jerk reactions.

However, there is a twist coming up. Brady Black (Eric Martsolf) starts questioning Philip. Then, Belle Black (Martha Madison) considers dropping him as a client. Will others start to see the game that Philip is playing? Or will it be too late by the time the truth comes out?