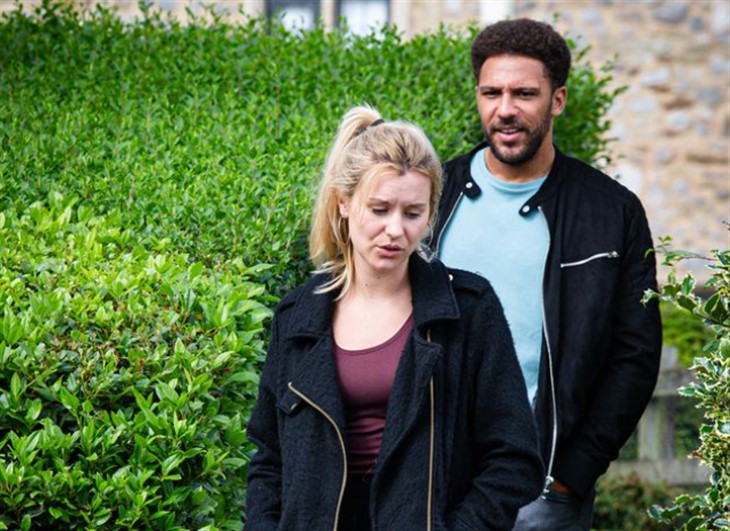 ITV Emmerdale spoilers reveal that Dawn Taylor (Olivia Bromley) is doing everything to prevent Billy Fletcher (Jay Kontzle) from finding out her secret. The actress explains in an interview that everything Dawn is doing, including sleeping with Ellis Chapman (Aaron Anthony), is for Billy’s protection. Plus, her killer secret is going to be discovered during the week of October 12.

When Dawn reported DI Malone (Mark Womack), she knew that there would be explosive fallout. However, she never imagined the horror that she would face. She also never predicted that she would end up killing him and Harriet Finch (Katherine Dow Blyton) would clean up the evidence. Ever since then, Dawn has been keeping the killer secret to herself and is doing everything in her power to keep Billy from finding out.

Emmerdale Spoilers: Jamie Takes Advantage Of Belle’s Voices, She Suffers For His Crime?

Speaking to The Sun, the actress explained why Dawn is being so self-destructive. She is trying to push Billy away because if he stops having feelings for her, then he will stop trying to figure out her secret. This is exactly the same reason why she got drunk and slept with Ellis. It was all to protect Billy, Bromley explained.

“Dawn is in a really dark and alone place. She’s not behaving rationally, but she also feels like she needs to protect Billy because he’s been in prison before. She feels that Ellis is a way to put distance between her and Billy. It is premeditated, but she only makes the decision to do it once she’s under the influence of drink.”

The actress explained that Dawn is terrified that if Billy gets close to figuring out what she’s hiding, then he could go back to prison. So, when he keeps snooping around and digging for information, Dawn makes some pretty drastic decisions to push him away.

Emmerdale spoilers reveal that Dawn finally confesses the truth to Billy. Bromley described the scene as “awful” and “so, so painful.” At one point, she crumples to the floor after realizing she has lost everything. Dawn hits rock bottom and in the depths of despair.

It is teased that there will be another shocking plot twist in Dawn’s storyline. What do you think it is and how will it affect Dawn’s future? We will have to keep watching the soap to see what happens in the next few weeks.