General Hospital Spoilers: Valentin Still Carrying A Torch For Anna – Will He Act On His Feelings? 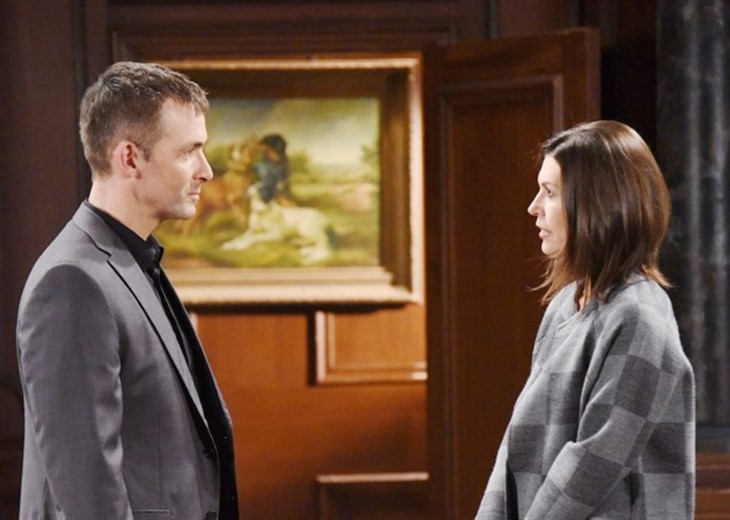 ABC General Hospital spoilers and updates tease that Valentin Cassadine, (James Patrick Stuart) after many years, may still be carrying a torch for Anna Devane (Finola Hughes)! This is even in spite of his great love for Nina Reeves (Cynthia Watros)!

Valentin and Anna have known each other perhaps longer than Anna and Robert Scorpio (Tristan Rogers)! Longtime General Hospital viewers as well as those who watched Anna and her sister Alex Devane Marick (Finola Hughes) on “All My Children” know all about the stories of Anna, Alex, and Robert.

General Hospital has changed their history somewhat from what happened on “All My Children” but basically, on AMC, it involved Alex being brainwashed by her and Anna’s natural mother, Charlotte Devane (Samantha Eggar) to believe she was Anna. She was also given missions to kill the imposter, who of course was Anna. This was through brainwashing, which of course could relate to memory transfer on GH.

It seems that it was during this time of impersonation of Anna by Alex that Valentin followed who he thought was Anna from spy school to give birth to Peter August (Wes Ramsey). Anna and Valentin figured that out in past conversations, although with the brainwashing/memory transfers Anna wasn’t sure if Peter was hers or Alex’s! But Valentin and Anna go back even further than that – to WSB spy school when he was known as a hunchback named Ivan Theodore! Even though he had an affair with Alex later on, it was Anna who he fell in love with. This was even before she started dating Robert!

Valentin no longer has any feelings for Alex, after finding out who she really was. However, in a recent GH episode in discussions with Anna about Alex, his conversation is very telling. On September 4, Anna got a call from Alex wanting Anna’s help. She wanted her to come to Berlin, Germany to help her turn herself into the authorities. She asked Valentin’s help then, but he said he was busy.

Her fiancé, Dr. Hamilton Finn (Michael Easton) put the kibosh on it as well. But on October 7, she and Valentin talked again about bringing Alex in, in the Metro Court. Valentin, even though he told Anna initially he was too busy to help her, had done some investigation through his contacts anyway. He told Anna it was a good thing that she didn’t go to Berlin, because his contacts told him it would have been a trap!

Alex wanted to kill her! They started talking about taking down Alex and Valentin wanted full disclosure, which Anna didn’t. She told him if he wouldn’t work with her without it, he could walk away. His answer was very telling…he told her he couldn’t walk away if he wanted to!

He wasn’t sure what this hold was she has on him, but he couldn’t stand it if something happened to Anna! Especially not at the hands of her sister! Then they decided the best way to capture Alex was to lure her to Port Charles.

It certainly sounds like Valentin’s carrying a torch for Anna after all these years! Stay tuned to GH, and keep checking General Hospital spoilers frequently for all the latest news, updates, and developments!