The Bold And The Beautiful Spoilers: Can Eric Forgive Quinn Again? Marriage Hanging By A Thread! 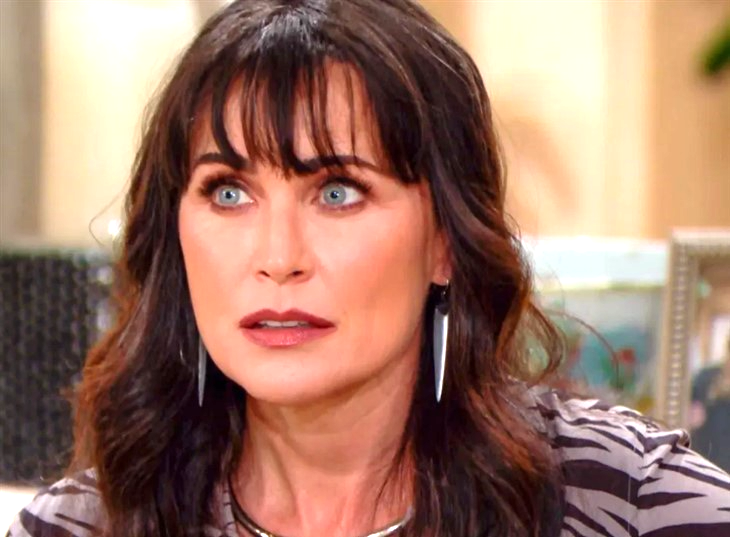 CBS The Bold and the Beautiful spoilers document that Eric Forrester (John McCook) will be forced to act. He’s known for legendary forgiveness, but quickly developing circumstances might make that personal choice impossible.

Brooke Logan (Katherine Kelly Lang) would love nothing better than to see Quinn Fuller Forrester (Rena Sofer) be stripped of her last name. A reversion to Fuller-only status is desired, based on the terrible plot Quinn and Shauna Forrester (Denise Richards) put into play.

But is it fair to ask if Eric would be too harsh in demonizing his wife for a situation that didn’t directly involve him?

Of course, those who despise Quinn and what she represents are hoping that Eric condemns her actions and then instructs Carter Walton (Lawrence Saint-Victor) to file divorce paperwork. McCook’s character would probably tell his attorney and Forrester Creations a new Chief Operating Officer that information in person, or over the phone, in order to avoid even the hint of a textual misunderstanding.

There’s no disputing that Quinn’s constant urging propelled Shauna to couple with Ridge Forrester (Thorsten Kaye). But the means and methods Quinn used to help her best friend realize that seemingly impossible goal was outright wrong.

B&B Spoilers – In The Matriarch’s Defense

Every accused individual deserves a defense. This soapy section serves as that on behalf of the character that the ever-great Sofer portrays.

There’s no comparison between Quinn’s indiscretion with Ridge, where they acted on mutual attraction and shared some kisses, and what’s happened this year. So, Eric’s willingness to forgive Quinn can be compared and even applied to this current choice.

Quinn has generally made Eric happy. But he might need some separation time in order to clear his head, while he considers everything on balance and decides if happiness can be restored.

But why should he divorce Quinn? It’s not as though Brooke is his greater love, right?

The Bold And The Beautiful Spoilers: Shauna Not Responsible For Eric & Quinn’s Split – Devastated Quinn Has Only Herself to Blame https://t.co/iC7Wjq92Cj pic.twitter.com/v2Vx6lNyDH

A quick decision would be unwise. At this stage of his life, Eric doesn’t need constant drama, or to always be looking over his shoulder for whatever mess might come next.

Eric came to love Quinn and has often said that he admires her having overcome her darker impulses. So, he’ll need to decide if he’s capable of helping her again, or feels she’s beyond redemption.