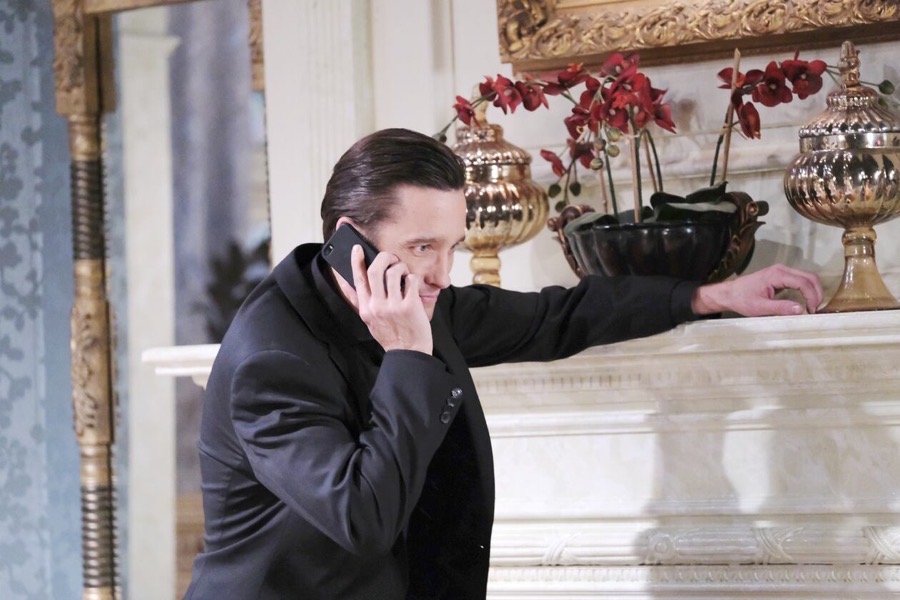 NBC Days of Our Lives spoilers reveal that Philip Kiriakis (Jay Kenneth Johnson) is scheming with a mystery person. We know it has something to do with Titan and Xander Cook Kiriakis (Paul Telfer) is getting in the way. Just who is the identity of Philip’s secret scheming partner? Could it actually be the very last person we’d expect, even an enemy?

Days Of Our Lives Spoilers – Taking Titan Away From Victor Kiriakis?

DOOL spoilers reveal that when Philip faced Victor Kiriakis (John Aniston), he was asked about making amends. Philip didn’t talk about their fallout and didn’t say Victor was forgiven. He demanded the CEO position of Titan and said that is how he could make it up to him. The situation that led to Victor and Philip’s estrangement isn’t something that can be easily forgiven, much less forgotten. So, it would make sense that Philip wants justice.

The only way to hurt Victor is by targeting his business. While Brady Black (Eric Martsolf) tried to run it into the ground, Philip may want complete control, not just to be the CEO.

In the next two weeks, Brady will catch Philip conspiring and calls him out on it. He starts to grill Philip about the scheme, his motivations, and his goal. To keep the plan moving forward, Philip will try to encourage Brady to join him and reap the rewards. Brady will have to pick a side, but which one will he choose?

Belle Black (Martha Madison) is leaning on Philip, who promises to protect her from Jan Spears (Heather Lindell). He threatened Jan, which led to his arrest. However, Philip is smarter than to incriminate himself. Belle is representing him but starts to get a bad feeling about him. Then, she overhears a conversation and decides to drop his case.

Days Of Our Lives Spoilers: Signs EJ DiMera Is About To Return – Don’t Count Out Actor James Scott Yet #Days #DOOL #DaysOFOurLives https://t.co/HkcCznUOnO

It’s easy to assume that Philip’s partner is the new intern, Charlie Dale (Mike C. Manning). But that is too obvious. Philip and Jan came to Salem around the same time. Xander heard him threatening Jan, but he’s smarter than that and more discreet. He reassures Belle and antagonizes Shawn Brady (Brandon Beemer). He hurls his drink at Sarah Horton (Linsey Godfrey) and doesn’t seem apologetic.

It’s a win-win for him… he gets Titan and Belle, while Jan gets her hands on Shawn. Philip isn’t the man we remember from years ago and it’s possible his quest for revenge is so great that he will scheme with anyone, including Jan Spears.