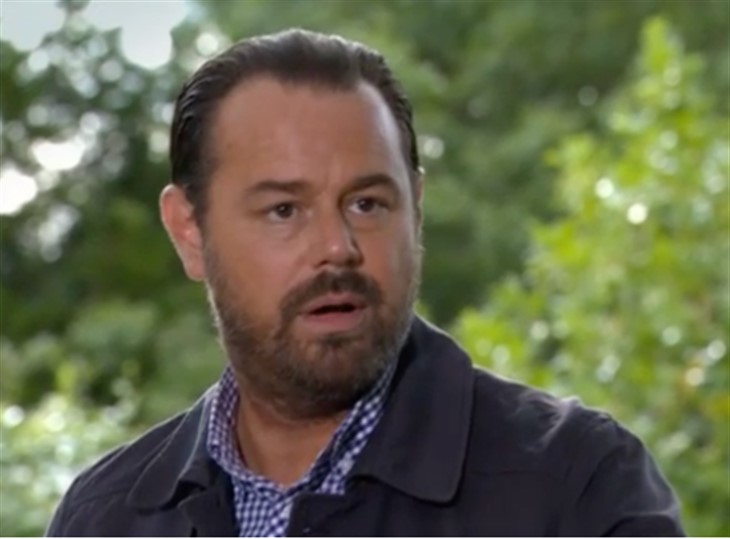 BBC Eastenders spoilers reveal that if Mick Carter (Danny Dyer) is Frankie Lewis’ (Rose Ayling-Ellis) father, then he was 12 or 13 when she was conceived. This doesn’t appear to be two young lovers that got pregnant, either. Mick’s secrecy, anguish, and inner turmoil suggest he was sexually abused. While this will deeply impact him, it will also affect Frankie in a very deep way.

Last week, Mick finally decided to confront Frankie about her suspicious behavior and the nosy questions. It was when Linda Carter (Kellie Bright) allowed Frankie to take Ollie Carter (Harry Farr) to the park. When Mick found out, he was frantic and raced to the part to find them. After all the photos of Ollie and pushing to get personal information from Mick, it’s easy to understand why the father would fear Frankie was a predator or kidnapper.

Then, Mick got the shock of his life when Frankie said that he might be her father.

Eastenders Spoilers: Chantelle’s Funeral Day Drama, Gray Might Not Attend And Here’s Why

Eastenders spoilers reveal that Mick has completely withdrawn, including pushing away his own family. He won’t tell Linda about Frankie’s claim and he really seems to be in a state of anguish, agony, and inner turmoil. Then, Mick pretended like he didn’t care that his wife was kissed by Max Branning (Jake Wood). Later, Mick confronted Max and called him a predator that preyed on a vulnerable woman.

Not to mention the courtroom collapse doesn’t seem to be just about all the questions about Leo King’s (Tom Well) murder. He was still trying to process Frankie’s bombshell and everything piled up on Mick. Max’s kiss, Frankie’s revelation, being questioned at Whitney Dean’s (Shona McGarty) trial, and everything else. It was all just too much for him to handle all at once.

All of these things already had fans wondering what was really going on in Mick’s head. Then, viewers did some calculations and realized when Frankie was conceived, he would have been 13 at the very oldest. This, combined with his behavior, withdrawal, and calling Max a predator is making the sexual abuse speculation a real possibility.

How Will This Affect Frankie Lewis?

Eastenders spoilers during the hiatus confirmed that Mick would get his biggest and best storyline ever. Bright said that the Carters’ marriage would definitely be tested. Then, it was stated by show bosses that we would find out what happened in Mick’s childhood that led to his crippling anxiety.

However, Mick isn’t the only one that will be affected by this. Frankie will also have to process and cope with the truth bomb. How will this affect her moving forward and if she really is Mick’s daughter, will they ever be able to form a bond? Or is this just too much for anyone to handle?