Days Of Our Lives Spoilers: Lucas Livid Nicole Tells Him Henry Was Conceived In Rape 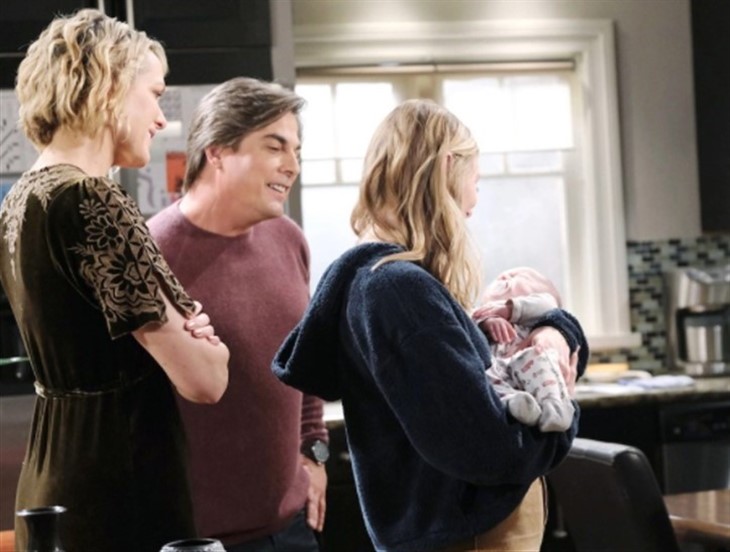 NBC Days of Our Lives spoilers tease that Lucas Horton (Bryan Datillo) will be livid when Nicole Walker Brady (Arianne Zucker) gives him devastating news this week on DAYS!

Nicole knows that Lucas has wanted to know who his grandson Henry Lucas Horton’s (Jayna and Kinsley Fox) is. He knows he wanted to know when Sami Brady (Alison Sweeney) was pregnant with his child, Allie Horton (Lindsay Arnold)! But now she feels like she has to tell the whole story, and it’s not an easy one to tell – it’s devastating.

But Nicole is convinced that Allie remembered the night Henry was conceived correctly because she used a technique she knew to get her to remember! If she remembered the rest of the night and what happened surely she identified her rapist correctly! She goes to Lucas to explain what happened the night Henry was conceived and who his birth father is. She will leave it up to Lucas to convey the news to Sami if he thinks she should even know!

The big question is has Nicole even talked to Allie about telling her father or did she just take it upon herself to do so? She respected Allie’s wishes about not telling things to her mother when she was in Salem! Nicole tries to break the circumstances of Henry’s conception to Lucas gently, but there is no “gentle” way to put it. She tells him that Allie was drunk the night Henry was conceived, but her memories came back and Tripp Dalton (Lucas Adams) took advantage of her drunkenness and had sex with her without her consent – which legally, constitutes rape!

It’s hard to imagine Lucas and Sami getting into a fight and both of them having survived! Sami’s temper and impulsiveness is bad enough, but Lucas’ is a close second! Lucas is livid, and shouts that he’s going to tear Tripp Dalton apart with his bare hands! Nicole may have sown the wind and reaped the whirlwind where Lucas is concerned! But she knows that he has a right to know – this concerns his daughter and his new baby grandson!

Of course, Lucas won’t go and literally tear Tripp apart with his hands, but he is sure to tear into him verbally! Making sure that Lucas is prosecuted will also be at the top of his list, but the case may not even be prosecutable. The crime happened in London, England and there is nothing except a “he said, she said” and even what has been said is not admissible in a court of law.

Justin Kiriakis (Wally Kurth) put a stop to that, although Tripp bolted from the Salem Police Department where Detective Lani Grant (Sal Stowers) had been questioning him. Tripp didn’t do himself any favors by bolting straight to Nicole’s apartment to ream out Allie for her accusations, either! He’s just making himself look guilty, and that fact wasn’t lost on Nicole when she came home and found him there! Nicole likely tells that to Lucas too, and he’ll make sure that he makes note of Tripp acting guilty as well!