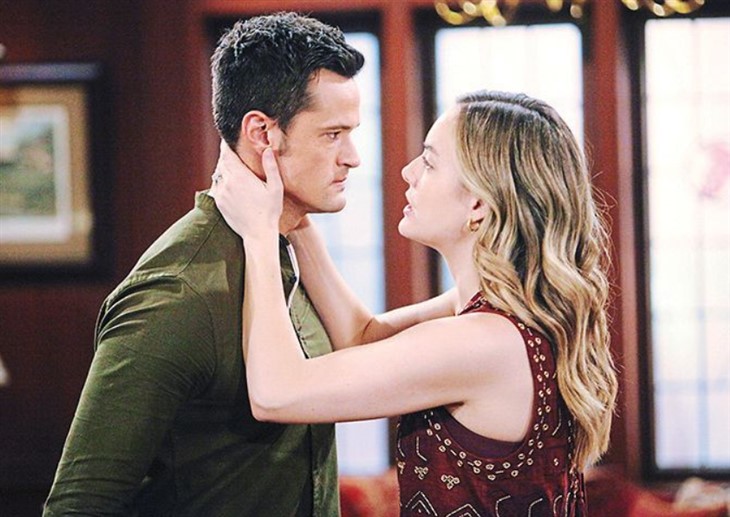 CBS The Bold And The Beautiful spoilers document that Thomas Forrester (Matthew Atkinson) has proclaimed himself better. Riding what he feels is the fast track to recovery and redemption, Thomas advised Hope Spencer (Annika Noelle), Zoe Buckingham (Kiara Barnes), and Zende Forrester Dominguez (Delon de Metz) that he wanted back in the family and to return to the family’s business.

But one pronouncement didn’t move the needle for Hope. She’d actually anticipated Thomas’ move by telling Zende that she wanted him to be Hope For The Future’s new designer just moments before Thomas entered FC’s main office.

The Bold And The Beautiful Spoilers: Steffy And Finn Grow Too Close For Some People’s Comfort

It’s not as though Thomas didn’t get along with Hope and Zoe many years ago when they were all children. Instead, Thomas wronged both ladies earlier this year, just before the production shutdown.

Hope has cautiously acknowledged that all has been going well in co-parenting Douglas Forrester (Henry Samiri). But her demeanor during those statements has always been guarded, as her experience with the Beth Spencer (Madeline Valdez and River Davidson) baby steal and conceal, along with the manipulation that took place during the lead-in to the planned Thoe wedding was similarly rough.

As for Zoe, she was humiliated at the ceremony where Thomas was expected to become her husband. That won’t ever be forgotten and hasn’t been fully forgiven either.

Thomas recognizes that his cousin is a true threat. He’d heard that marital issues were in play in Paris, France, and wondered how that might impact life in Los Angeles, California. Well, it already has.

Hope is someone Thomas still cares about, though it appears as though he’s broken his obsession with her. Zoe was someone he liked but never loved. Both ladies have Thomas’ number, but so does Zende.

The recast character that de Metz now plays told Thomas, in front of Hope and Zoe, that he was aware of the terrible things he’d done. That put Thomas on notice that he would also be viewing him with a cautious eye and implied that Zende would be looking out for those who’d been negatively affected.

Accepting Thomas’ offer to become Douglas’ adoptive mother was right. But Hope knew then and knows now that the link to Thomas through that child means that regular interaction will persist.

The Bold and The Beautiful Leak: Network Is Urging B&B Showrunners To Light A Fire Under CBS Show #bb #BoldandBeautiful https://t.co/oeUUqV5hIi

Hope has demonstrated on a number of occasions that she can handle Thomas. She has influence with him that only his parents, Steffy Forrester (Jacqueline MacInnes Wood), and his son can rival. That, along with her wisdom, should be enough to keep Thomas at bay. But his ability to go off the rails could always override Hope’s plans for the fashion division’s future and disrupt her personal life.