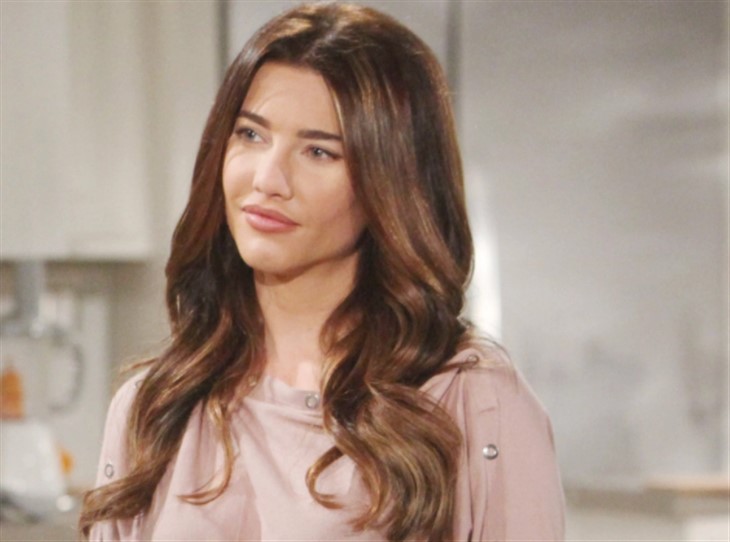 Thankfully, Steffy didn’t become deeply addicted. As B&B fans recall, the motorcycle accident that she suffered created unbearable pain following needed surgery. Finn then quickly became more than her doctor, as their fondness for each other rapidly developed into a romantic match.

The Bold And The Beautiful Spoilers: Thomas Continues To Feel Threatened By Zende, What Will He Do?

The Bold And The Beautiful Spoilers – Great Storyline Played Out Quickly

B&B could have chosen to write Steffy into full-blown addiction, which could have been drawn out well into next year. But the choice to present the flashpoint of this story coming out of the production shutdown and into the early fall period was wise.

This particular soap opera has the ability to operate on a different plotting level due to its half-hour format. So stories can be compressed, with the lesser number of connected characters and time availability for all arcs being fifty percent less than the other three remaining hour-long steamers.

Steffy will both recognize and appreciate the care that Lope offered to Kelly Spencer (Avalon and Colette Gray). Wood’s character wasn’t able to fulfill her maternal obligations during her fall into temporary addiction. Liam Spencer (Scott Clifton) stepped right in and took control of the former Steam’s daughter, which prevented any modest, or major safety issues from happening.

Hope Spencer’s (Annika Noelle) direct involvement in Kelly’s care was a point of contention as the drama unfolded. Steffy will see that Hope’s honest intention was to help. But a different form of conflict is developing between the connected men who are involved in this matter.

The Bold And The Beautiful Spoilers – John Finnegan’s Importance Increasing

If Finn is to become Steffy’s next great romantic leading man, then he’ll become a regular part of Kelly’s life. He appears to have no children of his own. So Kelly will take on stepdaughter-type status, unless, or until, Finn and Steffy marry, in which case he will assume that title.

Liam’s initial angst with Finn involved a spotted conflict of interest concerning Steffy’s health care. Finn admitted as much to Liam as Steffy’s addiction issue came to a boil, which could indicate that both guys will have mixed interactions.

Daytime is rightfully about drama. So, Liam and Finn disagreeing about Steffy’s well-being is all but certain, with some differences of opinion about Kelly probably being written into the mix as well.