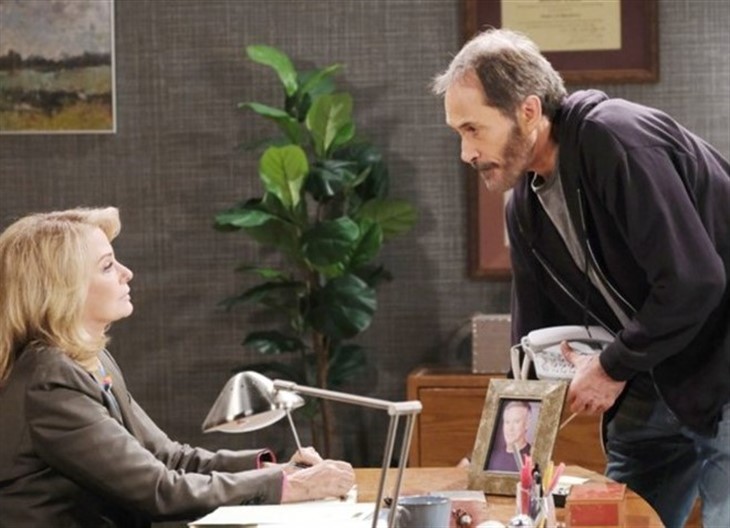 NBC Days of Our Lives spoilers for the week of October 19 reveal that Orpheus (George DelHoyo) will escape the prison and head straight to Salem. While John Black (Drake Hogestyn) is sick with worry, Dr. Marlena Evans (Deidre Hall) faces her worst nightmare. The supervillain begs Marlena for help, but is this just another trick? What does he have planned this time?

DOOL spoilers reveal that Orpheus was in prison. The last we heard from him, Rafe Hernandez (Galen Gering) confirmed the supervillain was still in custody. At the time, he was being transferred. However, he eventually escapes and heads straight to Salem. There are a lot of reasons why Orpheus would return and none of them are good. In an extra twist to the story, Orpheus runs into Clyde Weston (James Read). The two end up making an “uneasy alliance.”

While Orpheus and Clyde are on the run, Salem has a widespread blackout. Marlena still hasn’t made it home. John will begin to panic and worry about what’s happened to his wife. When Belle Black (Martha Madison) stops by to check on “Jarlena,” John shares his concern with her. It turns out that there is a valid reason why John should be concerned.

Days Of Our Lives Spoilers: Lucas Livid Nicole Tells Him Henry Was Conceived In Rape

Days of Our Lives spoilers reveal that Marlena will end up facing her worst nightmare. The man that has terrorized her, as well as all of Salem, repeatedly over the years. A photo published in the new issue of Soap Opera Digest shows Marlena looking absolutely terrified. She’s wearing a coat and carrying her purse, so she must have been heading home. Orpheus is gripping Marlena’s arm as she leans backward, trying to get free.

The magazine also teases that Orpheus needs Marlena’s help, but this has to be some kind of trick. The only reason Orpheus would need help is if it had to do with his son, Evan Frears aka Christian Maddox (Brock Kelly). We can’t imagine a supervillain like Orpheus would “need” Marlena for any other reason.

However, we have to admit that the look on his face does suggest he’s desperate. But we also have to remember that Orpheus is a pro at manipulation and coercion. What do you think the supervillain has planned? Does he really need Marlena’s help or is it just part of his sinister scheme?.