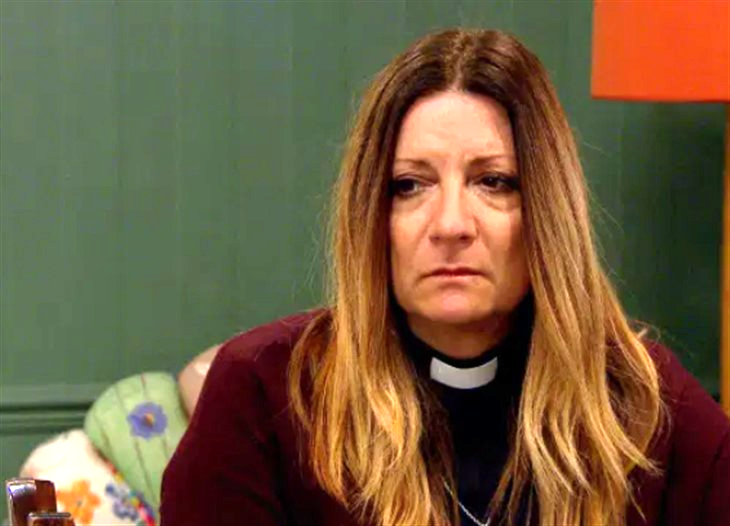 ITV Emmerdale spoilers reveal that Harriet Finch (Katherine Dow Blyton) left after some shocking events. However, she is about to return and will learn that Dawn Taylor (Olivia Bromley) has disappeared. She will probably go into a panic because of the secret that they both share. Will she go to find Dawn and drag her back home? Or will she go on as if nothing happened?

After reporting DA Malone (Mark Womack), there was concern that he could end up targeting Dawn and making her pay. That ended up happening, but his plan to have her overdose on drugs didn’t work. What ended up happening is there was a big scuffle and in order to save her own life as well as Harriet’s, Dawn killed Malone.

Emmerdale spoilers reveal that Harriet cleaned up the bloody mess and took care of Malone’s body. It seemed like she was doing all of the work while Dawn was freaking out. She sat in the corner trembling while her mind started racing. However, Dawn hasn’t been able to pretend like nothing happened. Others might be fooled, but Billy Fletcher (Jay Kontzle) knew that Dawn was hiding a secret.

The more Billy tried to find out the truth, the more Dawn pushed him away. She finally ended up getting drunk and sleeping with Billy’s brother. She knew that would be unforgivable and it certainly did the trick. However, it also destroyed Billy and Ellis Chapman’s (Aaron Anthony) relationship.

Now, Dawn has set out to disappear, but she didn’t take her son.

According to Metro, Harriet is going to return and she will learn that Dawn has disappeared. Harriet could end up going into a panic over the situation. She needs Dawn to keep her mouth shut about killing Malone. After all, Harriet cleaned up the mess, got rid of the evidence, and got rid of the body. However, what will she do about Dawn vanishing? Will she look for her or just hope that nobody finds out their killer secret?

What do you think is going to happen with Dawn Taylor? Why didn’t she take her son and will she come back? What will Harriet Finch’s reaction be when she comes back to learn Dawn has vanished?