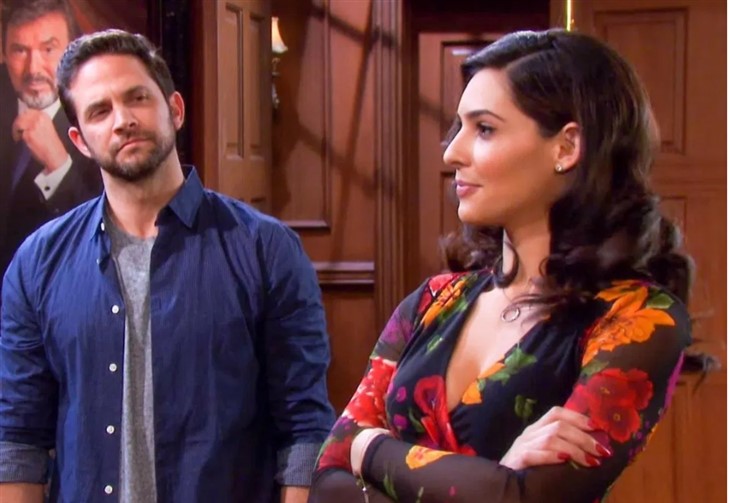 NBC Days of Our Lives (DOOL) spoilers tease that Jake Lambert (Brandon Barash) may have a difficult time convincing Abigail DiMera (Marci Miller) and Chad DiMera (Billy Flynn) that Gwen Rizczeck (Emily O’Brien) means them harm. Meanwhile, in Salem Chad is convinced his newly found brother is the real threat, not Gwen. While Abigail is less inclined to dislike Jake, she too has under Gwen’s spell. But Jake knows Gwen better than anyone and rightly thinks that Gwen is up to no good.

As viewers know, Jake recently overheard Gwen talking to a portrait of Stefano DiMera (the late Joe Mascolo). She made it clear during her “conversation” with the painting that she had targeted Abigail for unknown reasons at this time. Jake will likely try to convince his half-brother that Gwen shouldn’t be trusted. But Jake is the one that Chad doesn’t trust, thanks in part to the fact that Jake looks exactly like his late twin, Stefan DiMera (also Brandon Barash). Stefan had an affair with Abigail while she was suffering from DID and calling herself “Gabby”.

Abigail, for her part, doesn’t hate Jake the way Chad does. But unfortunately, Gwen has ingratiated herself into Abigail’s first, not only as Chad and Abigail’s nanny but also as her friend. Abigail won’t believe Jake’s claims about Gwen. But she should heed Jake’s warnings, because he was up until very recently, dating Gwen and knows her better than anyone else. Gwen secretly hates Abigail for reasons not yet revealed.

Days Of Our Lives Spoilers: Clyde And Orpheus Form An Uneasy Alliance As They Again Join Forces

Jake will likely soon realize that there is one person who could possibly help him expose Gwen once and for all. And that person is Gabi Hernandez (Camilla Banus). Gabi had to flee Salem when it was revealed that her entire family was in danger. But she lied to Jake and told him that she was leaving because she didn’t love him in order to protect him from the danger that her family was in. Hopefully, that situation will resolve itself, so Gabi and her brother, Rafe Hernandez (Galen Gering) can safely return to Salem. Hopefully, that will be when Jake catches up to Gabi!

Although there is no love lost between Gabi and Chad and Abigail, Gabi also hates Gwen with a passion. Gwen made an enemy out of Gabi when she stood in her way of a potential romance with Jake. Gabi knows that Gwen is dangerous and might be exactly the right person to fight dirty enough against Gwen to take her down a notch or two!

Will Jake be able to locate Gabi and bring her safely back to Salem? Can Gabi expose Gwen before Abigail’s falls victim to her unknown enemy? Anything can happen in Salem, so stay tuned to Days of Our Lives, airing weekdays on NBC. And don’t forget to check back right here for all your Days of Our Lives news, information and spoilers!