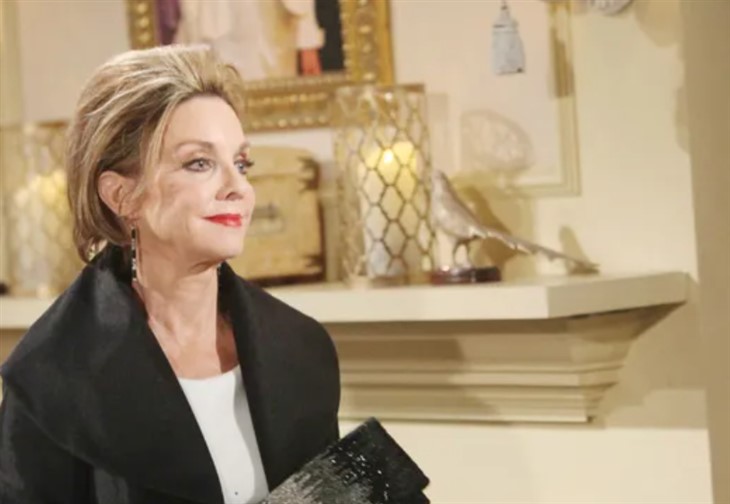 CBS The Young and the Restless spoilers document that Gloria Simmons (Judith Chapman) hasn’t been seen in a few years. But she’s returned to Genoa City, Wisconsin, and will spend needed time with her children and newest grandchild.

Gloria’s last appearance included her unexpected arrangement with Jack Abbott (Peter Bergman), who had been a longtime rival. The reality of this non-romantic couple was astounding, yet did offer many laughs until Gloria departed her post outside of Jabot’s main office, which has been replaced by a smaller meeting room in 2020.

The Young And The Restless Spoilers – Side-Character Builds To Regularity

William’s death didn’t mean the end for Shackelford, who then played his identical twin, Jeffrey Bardwell. Gloria (Chapman) fell for the con man and they married on multiple occasions. There was a brief period in 2011, when Kin Shriner (Jeffrey), who’s currently on General Hospital as Scott Baldwin, played this character as well.

Chapman took the role she was offered and made it her own, arguably establishing Gloria as one of the great new characters on Y&R within the last fifteen-plus years. This actor has stolen countless scenes with her brilliant mix of dramatic and comedic chops, along with impeccable timing.

The Young And The Restless Spoilers: Sharon’s Prognosis Looks Good – Is Health Crisis Over?

Gloria’s nuptials to William and Jeffrey aside, along with marriages to River Baldwin (Michael Gross), and Terrible Tom Fisher (Roscoe Born), never topped the feelings Gloria had and maintains for the late John Abbott (Jerry Douglas). While he’s been gone for many years, she always refers to him as her greatest love.

Gloria met John toward the end of his life. They genuinely fell for each other. While the Abbott’s and most of GC doubted this union and came to believe it was the source of John’s ultimate downfall, this couple was good for each other in many ways.

The Young And The Restless Spoilers – Khloe Stunned To See Glo

Kevin Fisher (Greg Rikaart) and Chloe Mitchell (Elizabeth Hendrickson) are surprised by Glo’s entrance into the Chancellor mansion. While Jeffrey’s nickname sticks, she remains without her most recent husband. They had a falling out and apparently aren’t married anymore. So, Gloria could use her maiden name, Simmons, or Abbott, if she wanted to take another jab at John’s family.

As referenced, Jack grew to be fond of Gloria before she left town. His own search for love might include a reunion with Chapman’s character. She was interested in romance during their past cavorting, while he wasn’t. The potential for more exists but isn’t necessarily what will happen for this always unpredictable and therefore great character (and actor).