Days Of Our Lives Spoilers: Clyde Tries To Save His Son From Himself, Does Ben Go Off The Deep End? 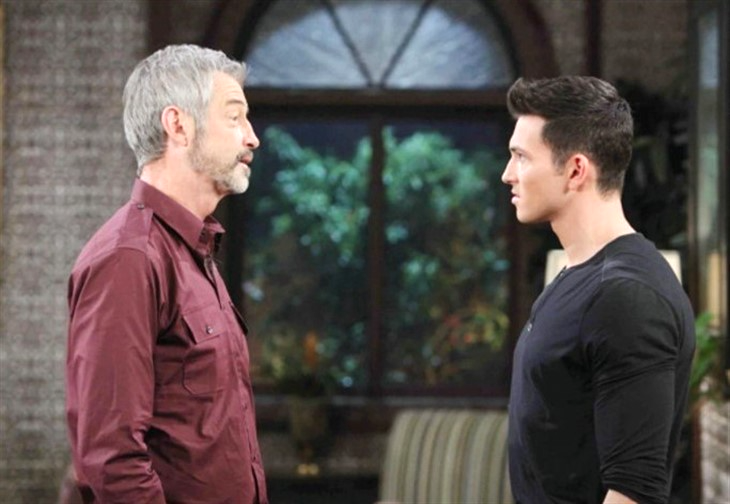 NBC Days of Our Lives spoilers tease that Clyde Weston (James Read) will try to save his son from himself in an upcoming episode of Days of Our Lives. Does Ben Weston (Robert Scott Wilson) really go off the deep end of despair and try to turn Vincent Belman’s (Michael Teh) on himself?

Days Of Our Lives Spoilers Dr. Marlena Evans Is Not Available To Help, Orpheus Has Her Trying To Free Christian Maddox

Dr. Marlena Evans (Deidre Hall) is not available to help Ben if he becomes suicidal; Orpheus (George Del Hoyo) has taken her. He has forced her into trying to intervene at Bayview Sanitarium, to get his son Christian Maddox/Evan Frears (Brock Kelly) released. That could pose some problems if she is not his doctor of record! She likely has not been able to return Ben’s call warning her about Orpheus either, and this will only drive Ben deeper into the depths of despair.

He may worry that she too, is dead, and he cannot cope with accepting the fact that Ciara Brady Weston, (Victoria Konefal) is really dead. He could do nothing to stop either death in his mind, and even though Clyde offered to act as Ben’s hitman where Belman was concerned, Ben declined. Clyde claimed not to be a “headshrinker” but he correctly surmised that Ben was out to kill Belman and take his revenge. Clyde didn’t want his son on death row again. He was talking to Ben about that very thing when Eli Grant (Lamon Archey) showed up at Ben’s hotel room door, likely to tell Ben his father was loose, and perhaps look for him there and the two had to think quick to hide Clyde!

Days Of Our Lives News Updates: Arianne Zucker Chases Down UFOs In Her Latest Project

Clyde was not bad as far as being an amateur “headshrinker” was concerned, and Marlena would probably describe depression as anger turned inwards. Clyde may recognize that Ben’s anger and grief combined has caused him to become suicidal-not surprising since he literally lived for Ciara.

Ben has already said without his Ciara, he has nothing left to lose and didn’t care if he went back on death row or not. Luckily, his conscience, the good part of him appeared to him as Ciara (although Clyde was worried when Ben told him Ciara came to him in the hotel room) and reasoned him out of killing Belman, at least for the time being.

One can easily understand how Ben’s grief and anger would turn inward, and he would begin blaming himself for not being able to save Ciara – even Clyde picked up on that! But if he thinks Orpheus killed Marlena, and that’s the reason she hasn’t called him back, it could really be the straw that breaks the camel’s back. More truthfully, it could be the straw that totally breaks an already desperate and despairing Ben!

Psychology also has proven that a person cannot take but so much loss without it harming them mentally – in two or three short years, Ben has lost his sister Jordan Ridgeway (Chrishell Stause), his best friend Will Horton (Chandler Massey) to a cross country move, Stefan DiMera (Brandon Barash) to a bullet, and now Ciara and may worry about Marlena’s fate. Clyde will work hard to save Ben from himself!