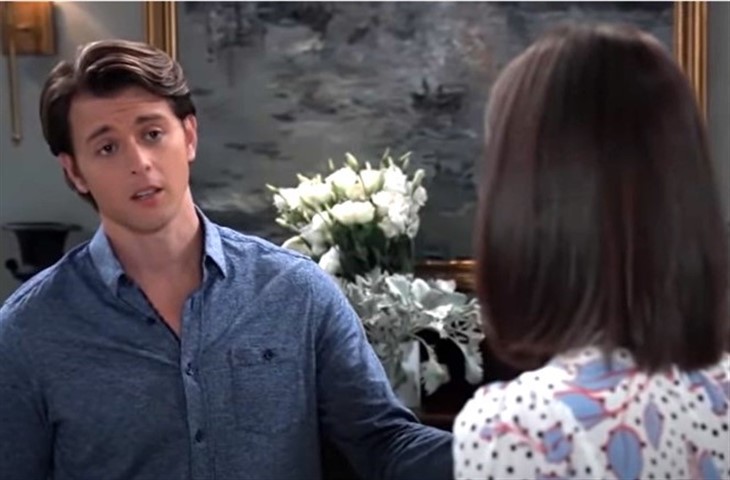 ABC General Hospital’s Michael Corinthos (Chad Duell) and Willow Corinthos (Katelyn MacMullen) got married in Port Charles, New York, to give them an advantage in the custody battle for Wiley Corinthos (Theo And Erik Olson). However, Wiley’s mother, Nelle Benson Jerome (Chloe Lanier) has now been declared dead. Should Michael and Willow stay married or should they try to find someone else?

General Hospital’s Michael and Willow because friends long before they were married. Both Michael and Willow were grieving a child and they connected through their loss. Michael was immediately attracted to Willow and the two became fast friends.

if Harrison Chase (Josh Swickard) hadn’t stolen her heart. However, everyone knew the right choice for Wiley was for Michael and Willow to be together. Wiley’s needs had to come first.

General Hospital’s Willow thought that Wiley was her child. Willow gave her child up for adoption and picked Lucas Jones (Ryan Carnes) and Brad Cooper (Parry Shen) to be his parents. Willow was allowed into Wiley’s life to keep up the pretense. However, Brad knew the truth all along. Brad allowed Willow to get close to Wiley to keep the truth of his true parentage hidden. Almost two years later, Willow found out the truth. Willow’s reputation and her connection to Wiley were exactly why Willow was the right person to be his mom.

GH Spoilers – Should Michael Corinthos And Willow Tait Go Back To Their Partners?

General Hospital’s Michael and Willow could go back to Chase and Sasha Gilmore (Sofia Mattsson). However, Michael and Willow believe their former significant others cheated on them. How could Michael or Willow ever trust them again?

Could Michael and Willow go back to the way things were or will they always be looking over their shoulder for their significant other to cheat again?

No all fans are convinced of this pairing but a great deal is. Michael and Willow deserve to have a happy ending. Can they be that for each other?