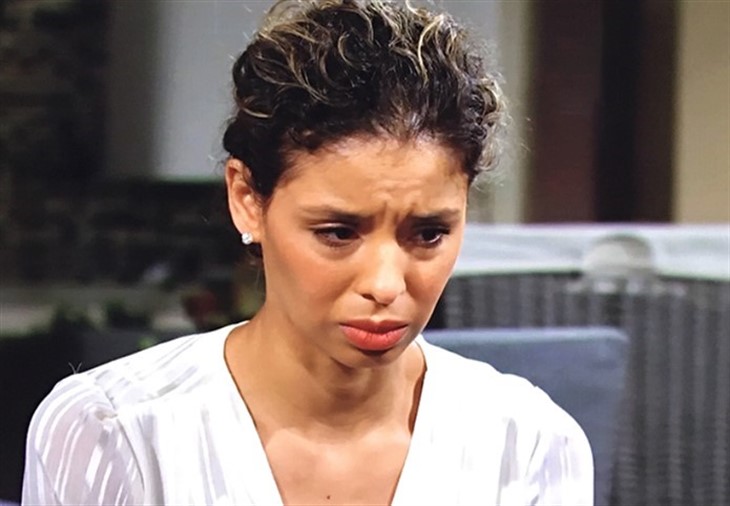 CBS The Young and The Restless spoilers tease that in Genoa City, Wisconsin Elena Dawson (Brytni Sarpy) is living a nightmare as she sees Amanda Sinclair (Mishael Morgan) and Devon Hamilton (Bryton James) getting cozier and cozier!

Elena knew that her impulsive tryst with Nate Hastings (Sean Dominic) at the clinic was a mistake the minute it happened. At the same time, she knew it was not something she could take back or undo. She couldn’t deal with her guilt and finally, on the night that Devon was to receive his big award at the Grand Phoenix, she came unglued and told him everything! Devon was too hurt to forgive her and so angry at Nate he punched him out, causing him to cut his hand severely.

Nate is a surgeon, and if that was his dominant hand that he injured, that could be a problem, at least temporarily. Elena was very concerned and followed Nate to the hospital where it was determined his hand had nerve damage. As for Devon, he told her to spend the night in the guest room and get out in the morning. She cried on Lola Rosales’ (Sasha Calle) shoulder and Lola invited her to move in with her.

The Young And The Restless Spoilers: Summer Turns The Tables On An Unsuspecting Kyle – Will He Try To Win Her Back?

Elena then quit the New Hope Clinic to get away from Nate, who tried to talk her out of leaving. But Elena will likely have a more difficult time avoiding seeing Devon and Amanda, considering Lola’s apartment is over “Society” the restaurant where she is head chef! EVERYBODY goes to Society, even though Amanda living in The Grand Phoenix Devon and Amanda could as easily meet there!

Devon invited Amanda to go on a business trip to New York with him, but she passed on that. However, she got a letter from her private investigator with a new mystery to solve about her past. It would seem Rose Turner wasn’t her and Hilary Hamilton’s (Mishael Morgan) mother after all. Devon will want to help her find out who her family is, since the only family she has is him – he would have been her brother-in-law had Hilary lived so he thinks of her as family. That will likely take some time and a lot more meetings together.

Besides, since Devon dumped Elena he’s free, and Nate was seeing Amanda, so she’s going through the same kind of betrayal he is for the same reason! That’s bound to bring the two of them closer – as far as Elena is concerned! It’s difficult to tell what is going on between people if looking from a distance, and wrong impressions can be given.

Wrong impressions looking from a distance is what got Elena in trouble, to begin with – her insecurities drove her into an emotional tizzy, feeling certain that Devon would choose Amanda over her. Devon wasn’t even looking at Amanda at anything except the person who would have been his sister-in-law, but now Elena’s choices may have become a self-fulfilling prophecy, with her indiscretion with Nate driving Devon and Amanda together!