General Hospital Spoilers: Is Carly Right, Could Nelle Be Stalking Jocelyn And Her Friends? 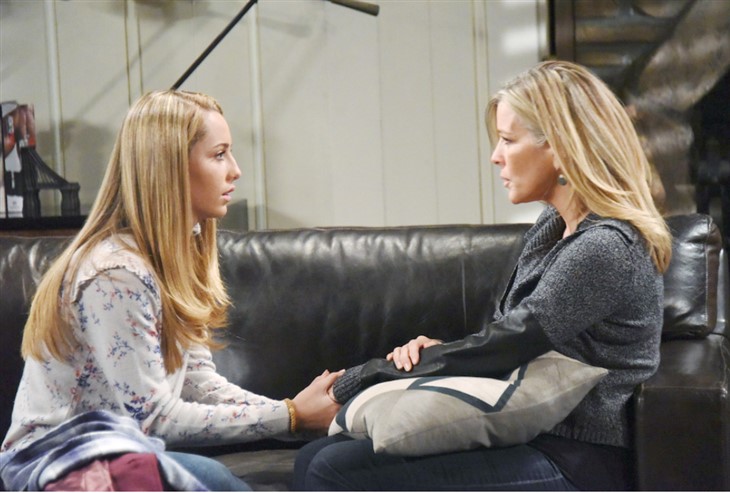 ABC General Hospital spoilers and updates reveal the Port Charles, New York Halloween episode shows someone in a mask following Jocelyn Jacks (Eden McCoy) and her friends. Could Nelle Benson Jerome (Chloe Lanier) be back to get revenge? Is someone from General Hospital Dawn of Day continuing to torment the Corinthos family?

General Hospital’s Carly Corinthos (Laura Wright) has always had good instincts when it comes to her children Carly has been having nightmares that Nelle is coming back for her kidney. Nelle is haunting Carly from the grave but is it just Carly’s imagination? Is Carly so upset that she could save Nelle that she’s dreaming this up herself? Is Nelle really haunting Carly because she survived the fall and faked her death?

Nelle Benson Blamed Carly Corinthos For Everything Wrong In Her Life

General Hospital’s Nelle blamed Carly for everything that went wrong in her life. Now Carly says she feels she should remember something. Is there something in Carly’s past that she should know that is connected to Nelle? Perhaps Carly knew that Nelle was adopted but cannot recall it? Perhaps something happened that Carly blocked out Nelle’s appearance because she found it traumatic somehow? Did Carly remember the necklace that Nelle had on that night? Did Nelle say something that keeps eating at her now? Why is Nelle still haunting Carly after everything she has done?

General Hospital’s Nelle felt like she was used to save her adoptive sister’s child. Nelle blamed Carly for her father selling one of her kidneys. However, Carly knew nothing about this. Carly had no idea that Jasper Jacks (Ingo Rademacher) bought her kidney for their daughter Jocelyn. However, Nelle tried to convince Jocelyn that they had some lasting connection because of their shared kidneys. However, Jocelyn finally saw through Nelle’s pretense and ended up attacking Nelle herself. Now that Nelle knows that Jocelyn has no loyalty to her could Nelle try to take back her kidney?

Jocelyn only has one kidney because of her cancer. Is Nelle crazy enough to try to cut her kidney out of Jocelyn? Could Ryan Chamberlain (Jon Lindstrom) go after Jocelyn for revenge since Nelle is dead? After all, Ryan had a kidney taken from him without his consent as well. Harrison Chase (Josh Swickard) went to identify Nelle’s body. Chase had an affair with Nelle years ago, could he have made a mistake while identifying the body? Has Nelle killed once again and used that body to fake her own death? Is Ryan paying back a friend for their kindness?

Someone is stalking the children and Nelle is a good possibility. However, it could be someone unrelated to Nelle at all? Will that truth about Nelle is revealed soon? Is someone else out for revenge?