The Bold And The Beautiful Spoilers: Eric Must Make Hard Decision – Quinn Begs Husband To Reconsider 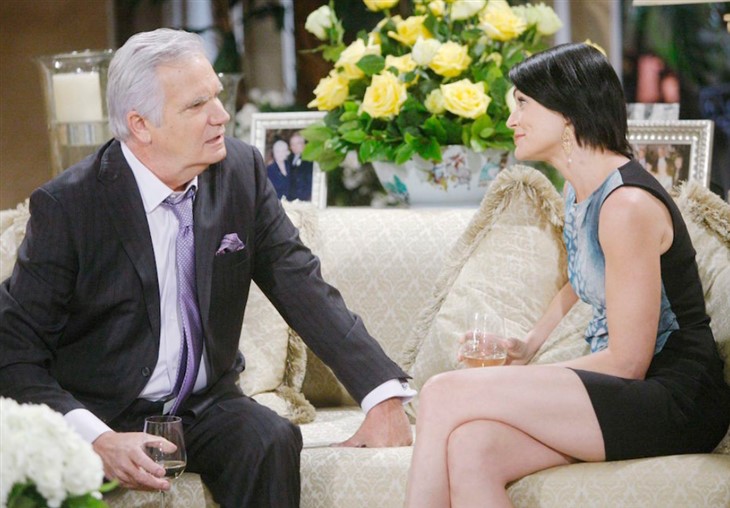 CBS The Bold and the Beautiful spoilers document that in Los Angeles Eric Forrester (John McCook) will hear from his wife. Her pleas to remain together won’t be totally discarded, but come a short time after she inadvertently exposed her latest scheme.

It’s not that Quinn Fuller Forrester (Rena Sofer) doesn’t love Eric, or that he doesn’t feel the same about her. But the total betrayal of trust she exhibited and general lack of disregard for the people The Bold and The Beautiful Eric cares deeply for make Quinn’s forgiveness case hard to argue or hear.

The Bold And The Beautiful Spoilers Insights

Quinn’s strongest point, or at least arguably so, is that she didn’t do anything to Eric directly. That’s true, as her attack centered on Brooke Logan (Katherine Kelly Lang), who did provoke Quinn.

Sofer’s character can cite the many instances, more recently and through the years, where Brooke encouraged the end of Queric. Earlier this year Lang told her one-time husband (Eric) that he should divorce Quinn and send her and Shauna Fulton (Denise Richards) back to the desert. That was when Eric was allowing Richards’ character to live in his estate, which furthered the connection Shauna developed with Ridge Forrester (Thorsten Kaye).

So, Quinn didn’t become involved with another man. Instead, she went overboard, as admitted, in trying to push her rival, Brooke, back.

The Bold And The Beautiful Spoilers: Thomas Obsession Is Hope’s Fault, Matthew Atkinson Explains Why

Quinn’s shortened name has been purposely referenced, as the reversion could come to pass. Her actions weren’t a one-time thing, but rather a carefully plotted plan that she worked to execution, albeit with some major flaws that led to Shidge’s rapid demise.

Quinn knows that Eric repeatedly told her to lay off Brooke. She didn’t do so. Quinn also knows that Ridge became a victim of the Bridge divorce hoax, which then enabled him to marry Shauna while he was heavily inebriated.

It is fair to assert that Quinn broke full trust with Eric and must now face the consequence of doing so.

Quinn doesn’t like, but understands, Eric’s desire to be separated from her. That is the temporary compromise, as he didn’t tell Carter Walton (Lawrence Saint-Victor), in person, to file divorce papers the same day he overheard Quinn admit what she’d done.

The Bold and the Beautiful Spoilers: Wyatt Schemes to Get Rid of Quinn, Wants Eric to Take Her Back! #bb #boldandbeautiful https://t.co/Z3cHZMJEHK

So, an ongoing separation could be viewed as an optimistic sign. It would represent Eric’s genuinely mixed feelings about ending his marriage. Coming episodes will reveal whether, or how soon, he plans to act.