The Bold And The Beautiful Spoilers: Quinn Tries To Make Amends With Ridge And Eric – Ridge NOT Interested 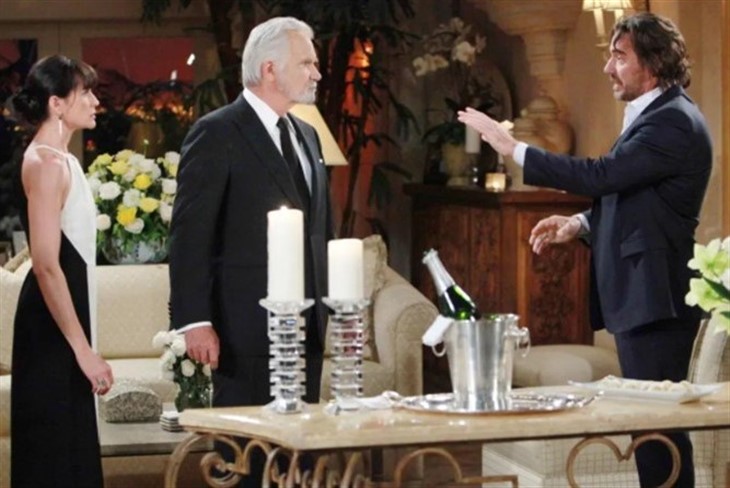 The Bold and The Beautiful spoilers tease that in Los Angeles Quinn Forrester (Rena Sofer) will try hard to make amends with Eric and Ridge Forrester (John McCook, Thorsten Kaye). But when it comes to forgiveness, for Ridge, it’s a hard pass!

The Bold And The Beautiful Spoiler Insights

Quinn has done some egregious things to split up Ridge and Brooke Logan Forrester (Katherine Kelly Lang) for good. This last time was only one of many attempts, and she didn’t want Brooke in Eric’s life either, and as long as Brooke and Ridge were together, she’d be in Eric’s life too!

But this last stunt, by far, is the most devious thing she’s ever done – and that’s saying a lot, considering she once kidnapped an amnesiac Liam Spencer (Scott Clifton), the half-brother of her own son and convinced him they were man and wife! Viewers will recall this last scheme lasted for several months as she planned and plotted to keep Brooke and Ridge apart so her longtime bestie Shauna Fulton (Denise Richards) could marry Ridge!

Brooke and Ridge had been going through rough patches because of Brooke’s accusations that Ridge’s son, Thomas Forrester (Matthew Atkinson) had been obsessed with and stalking her daughter Hope Logan (Annika Noelle). Quinn saw an “in” to breaking them up for good. First, Quinn tried to knock Brooke off the sobriety wagon by spiking her water with vodka – that didn’t work.

There was the famous fight between Brooke and Shauna and Quinn, over Ridge which Eric intervened on and broke up. Then Shauna happened upon Brooke and Bill Spencer (Don Diamont) kissing in Hope’s cabin, and took a cell phone video which Quinn uploaded to a digital photo frame which was set up at a reunion party for Brooke and Ridge. That was the straw that finally broke the camel’s back, and sent Ridge into a tailspin.

The Bold And The Beautiful Spoilers: Eric Must Make Hard Decision – Quinn Begs Husband To Reconsider

He went to Las Vegas with Shauna, where they got so drunk that he didn’t remember marrying her at a wedding chapel. Or, at least, HE got so drunk. Shauna was manipulated long-distance by Quinn into sending a text from Ridge’s phone to Carter Walton (Lawrence Saint Victor) telling him to file the divorce papers from Brooke that Ridge had never filed!

Then, they were to have a wedding ceremony in the Forrester mansion since Ridge didn’t remember the first one – but Shauna had an attack of conscience, and confessed her wrongdoing to Ridge on the phone. He already knew, thanks to Katie Logan Spencer (Victoria Tom) who had overheard Quinn’s conversation with Shauna, where Shauna was telling Quinn her misgivings.

Then after Shauna canceled the nuptials, Eric overheard Quinn castigating her over the phone – and now it’s come to Quinn having to move in with her son and Shauna’s daughter! So, Quinn decides to ask – no, make that BEG – for forgiveness from both Eric and Ridge, and it’s implied she talks to them together. For Ridge, it’s a hard pass – he will NEVER forgive Quinn. And if Eric knows what’s good for him, neither will he!