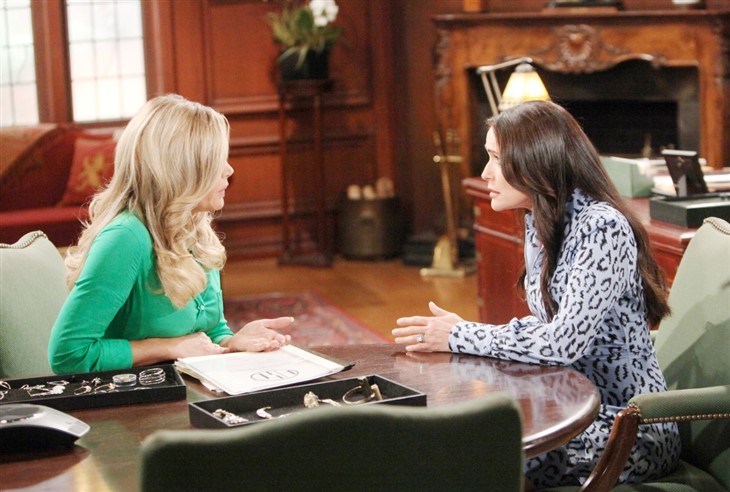 The Bold and The Beautiful spoilers tease that in Los Angeles Quinn Forrester (Rena Sofer) will accuse Shauna Fulton (Denise Richards) of stealing her man, after seeing that Shauna has moved into the Forrester mansion!

The Bold And The Beautiful Spoilers Updates

Viewers of The Bold and The Beautiful will recall that Quinn has not heard a peep from Shauna since her wedding ceremony to Ridge Forrester (Thorsten Kaye) went kaboom! However, it was Quinn’s life that “kaboomed” much more than Shauna’s. Shauna couldn’t go through with the ceremony and called Ridge and confessed to the scam that Quinn manipulated her into.

Then when Quinn found out the ceremony was off, she called Shauna and confronted her about canceling the ceremony, and that it wasn’t too late to marry Ridge for real! The big blowup happened between Quinn and Eric when he heard her on the phone with Shauna! It is the lack of communication from Shauna that puts ideas into Quinn’s head about Shauna stealing Eric away from her when she realizes that Eric has invited Shauna to move into the mansion!

She tries not to entertain those thoughts but she feels betrayed both by Shauna and by Eric! In the meanwhile, Quinn has moved in with her son Wyatt Spencer (Darin Brooks) and his significant other, Flo Fulton (Katrina Bowden) who of course is Shauna’s daughter. Quinn had quite the guilt-tripping job from her son, but kindhearted Flo asked her to move in with them – Wyatt provided the caveat that it had to be temporary!

Quinn will ask Flo – possibly in a not so friendly manner – if she knew anything about her mother moving in with Eric, after seeing her come down the stairs when she tried to get Eric and Ridge’s forgiveness! It’s doubtful that Flo knew anything about this, or she wouldn’t have invited Quinn to stay in her and Wyatt’s home. Flo’s apartment is empty if it hasn’t been rented since she is living with Wyatt, so she probably assumed that Shauna moved back there.

The thing is, Eric won’t let Quinn move back in and he has a kind heart like Flo so Shauna is probably in Ridge’s old room. Nothing has been said about anyone living in the guest house on the Forrester property where Shauna previously lived, so since Shauna appears to be living in the mansion perhaps Thomas Forrester (Matthew Atkinson) is in the guest house now. But Quinn’s mind is working overtime and her sense of rejection and betrayal coming from both Eric and Shauna take over, and she knows she has to have it out with Shauna!

It’s not right for a woman with who she has been best friends since their children were little to be living in her house without her living there, and her husband not letting her move back in! There has to be something going on between Shauna and Eric! So she heads over to the mansion and starts throwing accusations at Shauna about trying to move in on Eric!