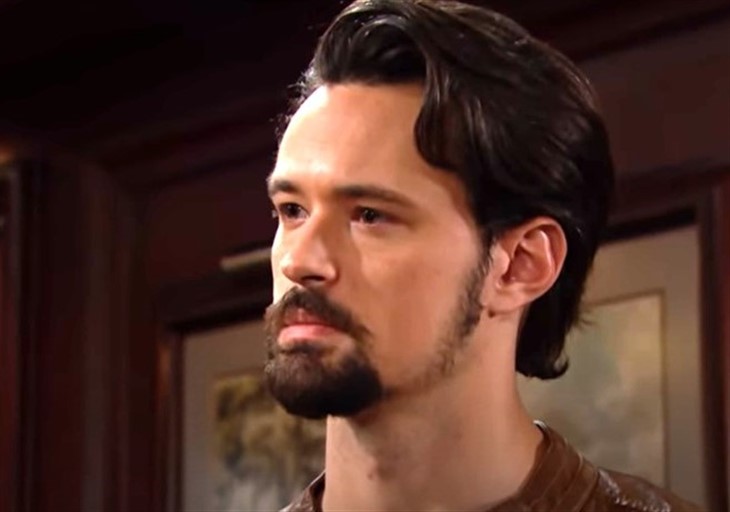 The Bold and the Beautiful spoilers document that in Los Angeles Thomas Forrester (Matthew Atkinson) continues to hear voices and appears incapable of stopping or even slowing the progression of this dangerous storyline. The totally soapy, but also delicious, mannequin tale appears to be leading to another confrontation that will create dramatic consequences.

Liam Spencer (Scott Clifton), who Thomas recently admitted to still being triggered by, remains on-guard. Liam loves Hope Spencer (Annika Noelle) but knows that she has softened her stance toward Thomas, which continues to weigh heavily on both men’s minds.

The Bold And The Beautiful Spoiler Insights

What’s clever about Thomas’ latest horror story is that he actually did experience an epiphany earlier this year. The humiliation he suffered, due to his own actions at the Thope wedding fail led to an extended period of soul-searching.

Thomas’ reappearance, which came after an approximate one-month absence in the spring and the months where the production shutdown created an extended run of classic episodes, was encouraging. He really seemed to be committed to improving himself. But Thomas’ suppressed darker elements have clearly reemerged.

Thomas Forrester’s Project Is A Winner

This particular storyline is a winner. Those who value the genre know that B&B is playing off its use of dolls in real-time shots. That reality is necessary due to current safety protocols in instances where actors don’t have a spouse, significant other stand-ins, or the particulars of a scene sequence call for its use.

It, in this case, is a plastic doll, with a face that appears to be made of composite materials and strongly resembles Noelle. The actor must get a kick out of seeing this likeness of herself on the set. She’s surely using that motivation as tinny voice-overs are recorded.

Thomas is hearing fake Hope tell him what he’s always hoped for. This version of his unrequited love wants him, not Liam the flip-flopper.

Living Outside Of Reality

What Thomas described as nightmares, when offering a veiled reference to the issues he’s facing, are actually confirmations of mental illness. So, it’s reasonable to believe that if Thomas doesn’t soon receive the treatment he’ll either harm himself or someone else.

Liam’s determination to keep an eye on Thomas means that Clifton’s character is the most likely person to be in his path when the Hope doll is discovered. If so, everything from the moment of that reveal will be very dangerous.