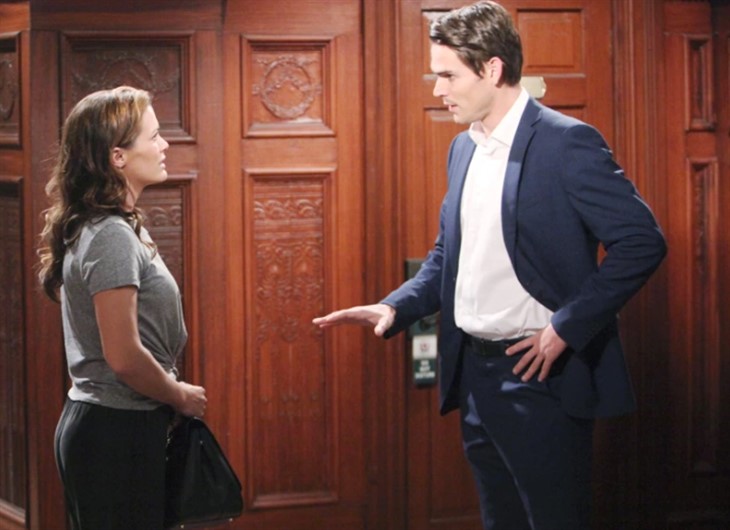 The Young and the Restless spoilers document that in Genoa City, Wisconsin Chelsea Lawson’s (Melissa Claire Egan) decision to leave Adam Newman (Mark Grossman) was sound. But whether it lasts is another question.

Teasers indicate that Egan’s character will be abducted. But the identity of her assailant won’t initially be known. Is it possible that Adam acts to silence one of the women he claims to love?

As devoted fans know, Sharon Newman (Sharon Case) is the other, recently reaffirmed soul mate. But for now let’s focus on Chelsea, who has entered a crisis period.

The Young And The Restless Spoiler Updates

Thankfully Khloe took Chelsea in after she left Adam. Chloe Mitchell (Elizabeth Hendrickson) was elated to learn that her restored best friend finally saw the light and cut herself off from the man who has long been believed to have accidentally killed Delia Abbott (Sophie Pollono).

Kevin Fisher (Greg Rikaart) recently let Adam know that he was glad to learn about his troubles. So, the united power of Khloe seemed to be the type of protective cover that was going to allow Chelsea to transition away from Chadam and toward an eventual relationship with someone else. But the coming abduction will throw a brick through that window of time.

The Young and the Restless Comings and Goings: Melissa Claire Egan’s Husband Checks In For Work At GC

Viewers will see that Adam appears to be targeting Newman Enterprises. Chelsea takes notice of the digital screen where he’s marked the building his discarded family name adorns.

This could simply be a red herring, with Y&R wanting fans to be misdirected into thinking that Adam reacts badly and feels the need to neutralize Chelsea indefinitely. But maybe not, because this is Adam.

With whatever he’s plotting and even if Adam doesn’t prove to be the person orchestrating Chelsea’s removal, his frazzled state of mind projects deep danger ahead.

Chelsea’s most recent health issue was the collapse that took place at Crimson Lights. Pregnancy potential is something that instantly popped into viewer’s minds during that moment, as it would keep her tied to Adam, assuming he’s the father of her next child.

The stand-out scenes where Chelsea asked Billy Abbott (Jason Thompson) for time with Johnny Abbott (Holden and Ryan Hare) could be seen as increasing the odds that Chelsea will have another child now, or in the near future. Whether that happens with Adam, or not, remains to be seen.