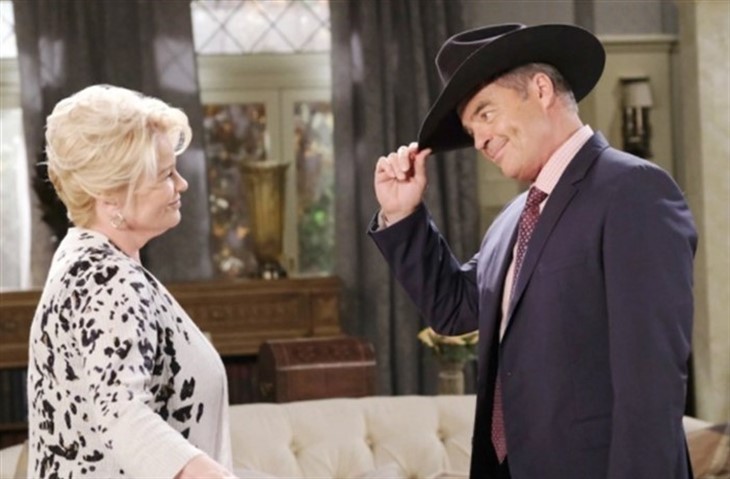 NBC’s Days of Our Lives  spoilers for November sweeps reveal that in Salem, Justin Kiriakis (Wally Kurth) will be in a vulnerable place. His wedding anniversary arrives and it’s a painful reminder that Adrienne Kiriakis (Judi Evans) is gone. Could Bonnie Lockhart (also played by Judi Evans) take advantage of Justin during this sensitive time? Or will she be a comfort to him?

DOOL spoilers reveal that head writer Ron Carlivati spoke to Soaps.com about what to expect during November sweeps. The scribe reminded fans that Justin and Adrienne’s wedding anniversary is coming up. As it gets closer, it will remind Justin of his dead wife.

Understandably, his wedding anniversary makes Justin vulnerable. Even though he has tried to move on with his life, he will never forget Adrienne. She was a central part of his life for decades. Even though the two married and divorced several times, they were together in the end. Unfortunately, Orpheus (George DelHoyo) and Evan Frears aka Christian Maddox (Brock Kelly) took Adrienne from the people that loved her.

Days of Our Lives spoilers reveal that Justin will be vulnerable and it is just after he forgives Bonnie. Now, many will assume that Bonnie will take advantage of Justin’s weakened state. However, it was teased months ago that Bonnie really has gone through a positive transformation. Unfortunately, it is going to take a long time before the Salem residents (and viewers) will believe that.

It seems that Bonnie might comfort Justin during this time, as much as fans don’t want to hear that.

Justin tried to move on after Adrienne’s death. However, he would realize on his wedding day that Kayla Brady (Mary Beth Evans) was in love with Steve “Patch” Johnson (Stephen Nichols). Even though it broke his heart, Justin let Kayla go and reunite with the man she truly loved.

Days Of Our Lives Spoilers Next Week: Philip’s Cover Blown, Sarah Figures Out He’s Up To No Good #DOOL #DaysOfOurLives #Days https://t.co/9GiNWnU0JI

So, Justin is about to have a new romance. Could it actually be Bonnie and might she have changed enough to where she might actually be good for him? It’s a long shot, but anything can happen in soaps! We will have to keep watching the NBC soap opera to find out.