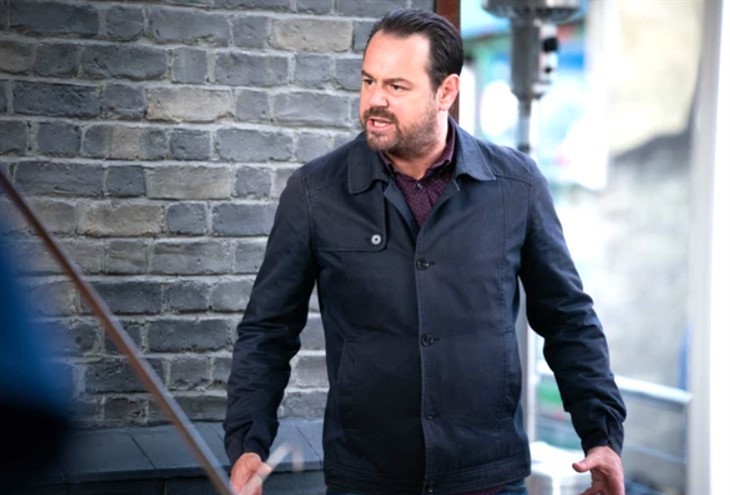 On Monday’s episode, Katy Lewis (Simone Lahbib) will arrive in Walford. Mick confronts his abuser and asks why he was never told about Frankie Lewis (Rose Ayling-Ellis). Her response sends Mick reeling. Later, Tina Carter (Luisa Bradshaw-White) talks about their time while in care. Then, Katy gets a message from her daughter, who wants to meet with her and Mick.

On Tuesday, Kat Slater (Jessie Wallace) overhears Phil discussing his divorce with someone on the phone. She brainstorms an idea and leaves without finishing cleaning his house. Later, Phil finds her at The Vic. She thinks she has the upper hand but is shocked to find Phil has broken into her house. Kat ends up agreeing to his demands, but on the condition that he considers her plan.

Meanwhile, Sharon decides Ian Beale (Adam Woodyatt) should move out (again). She has no idea of his feud with Kathy. However, she ends up being filled in on everything. Also, Honey tries to look after Jay and Tiffany Butcher-Baker (Maisie Smith) gets a job offer. Viewers can expect to see Whitney Dean (Shona McGarty) make a proposition to Gray Atkins (Toby-Alexander Smith).

As for Denise, she admits to having trouble bonding with Raymond. Jack Branning (Scott Maslen) offers to help her pay for a specialist. He also suggests that it might be a good idea to find someone from Raymond’s past. Maybe they can help or provide some insight. She decides to start at the church where Raymond’s adoptive father served as a pastor.

Eastenders spoilers for Thursday reveal that Phil accompanies Kat to her cleaning gig at the insurance company. Tina is worried about Mick and asks Ian to give him a job. He ends up getting a bartender shift but has a hard time keeping his composure when Shirley Carter (Linda Henry) shows up. When Katy’s name is brought up, Mick can’t hold in his rage any longer. He smashes a bottle of vodka, which doesn’t make Ian happy.

Denise and Raymond go to the church service. She talks to the pastor about the adoptive family and notices how happy the boy is to be there. It seems that she might end up having a revelation at church.